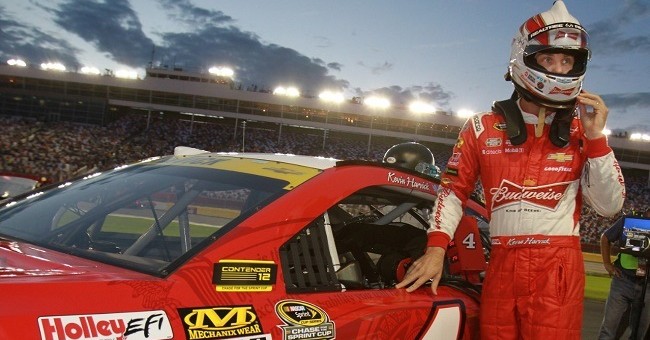 Team Chevy’s Kevin Harvick dominated the field at Phoenix International Raceway Sunday, leading 264 of the 312 laps. The race was a must-win for Harvick, who will now advance to the final round of the Chase along with Denny Hamlin, Joey Logano, and Ryan Newman.

Sunday’s victory marked Harvick’s sixth overall win at Phoenix, and his third in a row. Not all Chase drivers had as easy of a time as Harvick, though. Hamlin suffered a flat in his Toyota early on, costing him an entire lap, and Logano was handed down a pit-road penalty for driving away with fuel can dragging behind his car, leaving him in 26th place. Despite this, both drivers rallied back, with Hamlin finishing fifth and Logano sixth.

Despite finishing second, Jeff Gordon was knocked out of Sprint Cup contention following Sunday’s race. Gordon needed Newman to stay at bay if he wished to hold onto his spot, however the Stewart-Haas Racing driver pushed hard on his final lap, passing rookie Kyle Larson for an 11th place finish. In addition to Gordon, Matt Kenseth, Brad Keselowski and Carl Edwards were also knocked out of the Chase.

Gordon said Harvick was “in another ZIP code” all night. Kenseth, who finished third, also recognized he, nor the rest of the field, was no match for Harvick’s No. 4 Budweiser Chevrolet SS on Sunday.

“We had our car driving pretty good but we were no match for the No. 4 (Harvick), he’s been lights out. We had good short-run speed and good restarts, and I thought we had good strategy. Overall, it was a great day for us, but not good enough to get us to the next round.”

The Final Four drivers left in the Chase will duke it out for the title of 2014 Sprint Cup Champion during the Ford Ecoboost 400 at Homestead Miami Speedway next Sunday. Both Harvick and Newman are in a Chevy, so the bowtie stands a better chance at locking down a win than Toyota or Ford