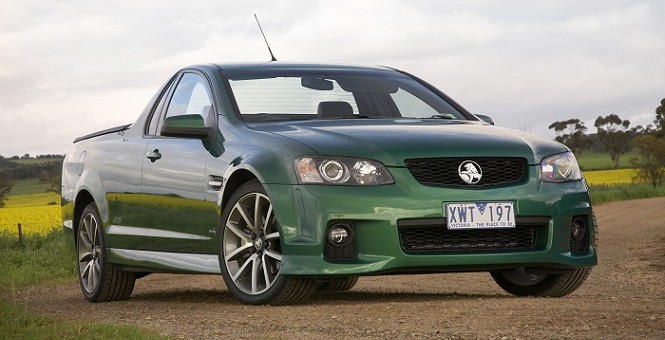 Not long ago we wrote about a Colorado-based company called Left Hand Utes, which imports Holden’s El Camino-like Ute to North America. There’s always been a following in the U.S. for the forbidden fruit that is Holden’s half car half truck, and Left Hand Utes has managed to become rather successful by filling a niche market many never knew was there.

Two of Left Hand Utes’ creations were at the SEMA show in Las Vegas this past week, including the Ivy Green 2010 Maloo the company said it was working on in April. For those not in-the-know, the Maloo is Holden Special Vehicles’ take on the Ute and uses General Motors’ 425 horsepower 6.2-liter LS3 V8. The example at SEMA even had a manual transmission, raising the drool factor even more.

The two owners of Left Hand Utes, John Ehrlich and Randall Reese, spoke to Australia’s CarsGuide at the SEMA show about their interesting start-up idea. They opened up shop in Denver about 18 months ago, and have completed 16 left hand drive Utes to date. According to them, GM “is crazy” for not bringing the Ute over stateside and missed “a massive opportunity.”

Some of you may remember when GM did have plans to bring the Ute to America, branded as a Pontiac and sold as the ‘G8 Sport Truck’. They even gave it a public unveiling at the 2008 New York Auto Show, but the plans fell through once the 2009 financial crisis hit.

Left Hand Utes will sell you a standard converted ute for about $40,000, while the top-of-the-line HSV Maloo version will run you about $95,000. That’s a 20 percent markup compared to what an Aussie customer would pay, but for the work involved, we’d say it’s worth it. Now who’s going to be first person to ask them to convert a Gen-F HSV GTS Maloo?