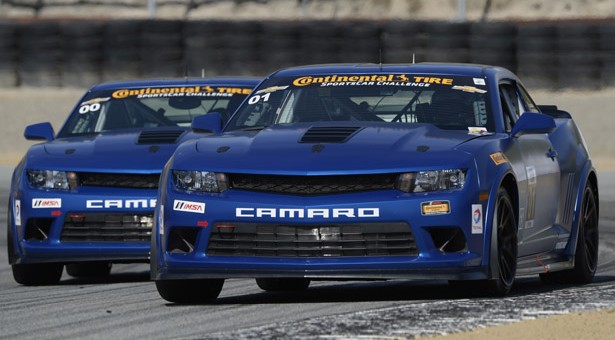 Two teams ran Chevrolet’s 2014 Camaro Z/28.R in this past Continental Tire Sportscar Challenge season, Stevenson Motorsports and CKS Autosport. The teams campaigned two cars, making for four Z.28.Rs in total on the Grand Sport class grid, but that could be set to change for next season.

Stevenson’s Z/28.R took them to a second place overall finish in the Grand Sport class, while CKS also managed to score a single win in one of their blue Z/28.Rs. It seems that wasn’t enough to get them to stick with the Chevy, as they’ve just sold their two Camaros to Toronto, Canada based team Mantella Autosport.

Mantella Autosport ran a single car effort last year in their Aston Martin V8 Vantage, but has hired on Martin Barkey and will take on another yet-to-be announced driver this year for a two-car effort in the Z/28.Rs. The team already completed an intial test day at Shannonville Motorsports Park in northern Ontario and has scheduled a second pre-season test for Nov. 19-20 at Sebring, according to SportsCar 365.

“Sebring is a very demanding circuit, both on equipment and driver ability. Consequently it is the perfect place to evaluate the cars and continue our programs development,” said Mantella Autosport team manager Andrew Wojteczko. “With Sebring as the second stop on the CTSC schedule, it will be an asset to have some additional testing time at this circuit.”

Stevenson Motorsports is expected to return to Continental Tire Sportscar Challenge competition in 2015 with their Z/28.Rs, while CKS’ plans have yet to be announced. It’s not likely they’ll be running a set of two new Camaros, so don’t expect to see six Chevy’s on the grid when the first race of the season, Daytona, rolls around in January.