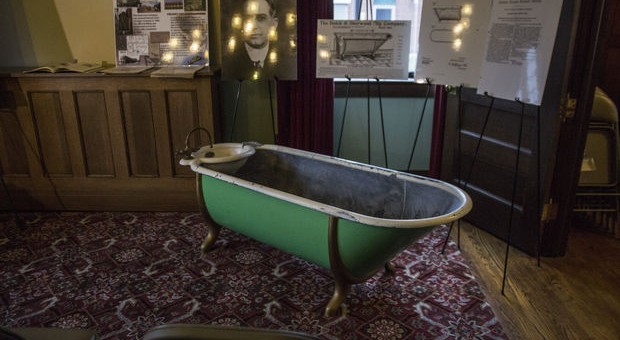 General Motors has always strived to be innovation leaders, but normally in the automotive realm, not in the personal hygiene sector. However before he started manufacturing gasoline engines, David Buick was the co-owner of the Buick & Sherwood Manufacturing Co., where he applied his inventive, creative mindset to bathtubs, sinks and more.

Mlive took a trip out to the Durant-Dort office building in Flint, where one of the unique David Buick-designed bathtubs currently resides. The tub, which features a built-in sink, was made in Detroit in 1898. It features six of Buick’s different patents and had only one water outlet, which made it easier for hotels to use as they didn’t need to install more than one water line in their rooms.

“That is the Dave Buick before he was building gas engines in Detroit,” Kevin Kirbitz, automotive historian and Durant-Dort museum trustee told Mlive.

Buick had many other creative plumbing designs, including a toilet which flushed automatically when you lowered the seat. Selling these Detroit-designed and built toilets, sinks and bathtubs is what helped fund Buick’s gas engine development ventures and get the automaker off the ground in the early 1900s.

“Innovation is a part of our heritage going back 130-plus years,” Wickham said. “Someone saw a problem and they invented something.”