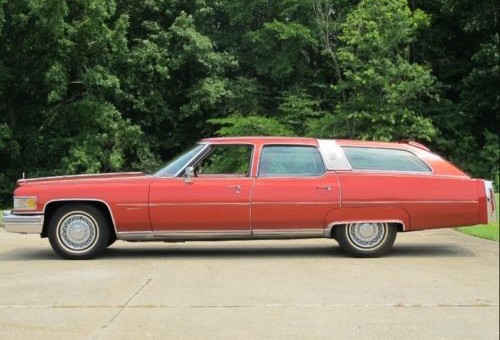 We drool at the late, lamented Cadillac CTS Wagon, but in a previous life Cadillac didn’t build wagons, as luxobarges for old folks was their MO. Sure, there were ambulances and and hearses that based on Cadillac chassis, but these quasi-wagons were not used to pile the kids and take ’em out for Slurpees. However, many of the same companies that converted Cadillacs into ambulances or hearses sometimes custom-built Cadillacs wagons for discerning customers. One of them recently popped up on eBay.

This 1976 Cadillac was built by Traditional Coach Works from Los Angeles, who converted a Fleetwood Brougham sedan into a wagon. If you know your Caddys, you know the Fleetwood was at the top of the pecking order with a 133-inch wheelbase. Seller claims these customs sold for three times as much as a standard Fleetwood, which means $30,000 in 1976 dollars − that’s a lot of wampum!

Production numbers are not know, but the seller estimates between 20-50 were built between 1975-76. Whatever the numbers, this “Castilian” Cadillac only has 9,700 miles. Seller wants $60,000, and he didn’t get it by the time the auction ended. We’ll guess that even though this is a very unique vehicle, it doesn’t come from Cadillac’s classic era so the price is a bit too rich.