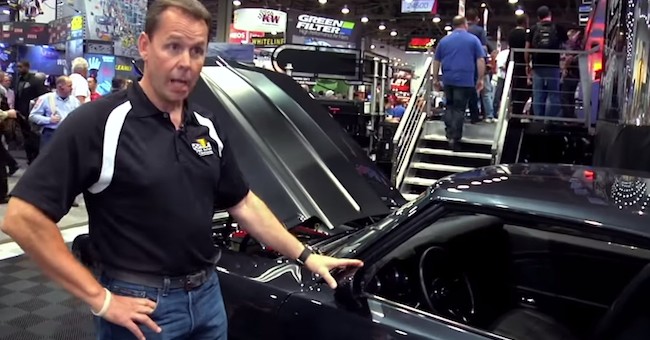 RK Motors in Charlotte, North Carolina is no stranger to building restomod muscle cars. We’ve featured a few of their breathtaking builds in the past, but none have appealed to us quite like the 1969 Camaro SS they built for this year’s SEMA Show in Las Vegas.

The restomod Camaro, which is now for sale, was built to showcase capabilities of RK Motors’ Performance Center, who built the entire car from the ground up. This being a show car, no expenses were spared in its restoration process, with the body panels being returned to “better than new” condition.

Under the hood is a General Motors LS7 crate engine, which RK says was dyno tested at 513 rear wheel horsepower. The engine has been upgraded with Kooks long-tube headers, a Be Cool radiator, Spal fans, new AC Delco plug wires and a Vintage Air front runner system. Power is to Moser 9-inch rear end with Moser axles and 3.31 gears through a Tremec six-speed manual transmission.

Check out the video below for more information on the car from RK Motors and sponsor Mobil 1. If you’ve got $189,000 sitting around taking up space in your bank account, why not buy the car at this link? If you do, don’t be afraid to offer us a ride, either.