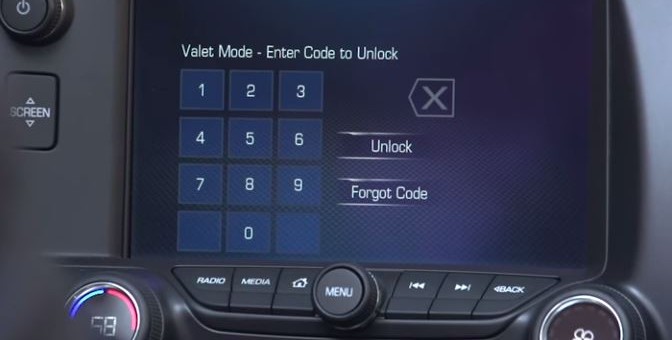 When the Performance Data Recorder (PDR) option was introduced for the 2015 Corvette, Corvette Product Manager Harlan Charles characterized the Valet Mode that was included in the package as “a baby monitor for your car” and added, “Anyone who has felt apprehension about handing over their keys will appreciate the peace of mind of knowing exactly what happened while their baby was out of sight.” However, now it has come to light that Valet Mode may violate privacy laws in certain states, so Chevrolet is developing a software update that should fix the issue.

PDR is a new feature that, in the words of Chevrolet, turns the Stingray into a driving analysis tool. A driver can record every aspect of his/her driving including real-time audio and video plus up to 30 channels of performance data. However, according to a notice sent to dealers, “To help our customers use the Performance Data Recorder consistent with legal requirements that pertain to audio recording devices, we will be requiring a very important update to the system of each affected vehicle in the near future. We expect that the update will be available early next month. At that time, we will provide details about the update and let you know what steps you need to take, if any, to complete the update for vehicles in your inventory.”

Chevrolet spokesman Monte Doran says, “The update will disable the audio recording feature in Valet Mode but all other features of PDR will continue to operate normally,” with General Motors telling dealers the following:

In the meantime, you must advise any customers who take delivery of an impacted vehicle that they should refrain from using the Valet Mode until the update takes place. If they do use the Valet Mode, they should notify any occupants of the vehicle that they will be recorded while in the vehicle, and obtain their consent to this recording. It is very important that you explain this to each customer at the time of delivery.

GM also sent letters to current 2015 Corvette owners asking them either to avoid using Valet Mode before the update becomes available or obtain consent from other occupants regarding being recorded..