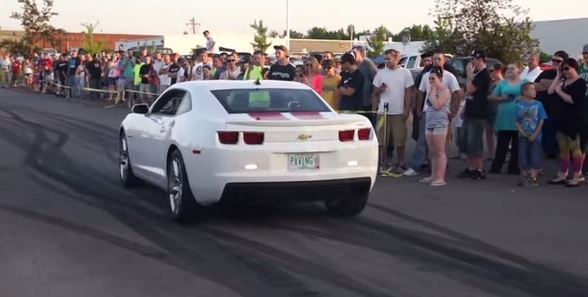 Burnouts are kind of an American past time. Any owner of a RWD car with enough power is guilty of laying some rubber down at least once in their lifetime, including yours truly. Manufacturers are even adding dedicated technologies to spin the rear wheels when one’s heart desires (we’re looking at you, 2015 Ford Mustang).

As many times as we’ve seen successful, awesome tire smoke shows, there’s always the one who fails in a downright embarrassing fashion. And now, we have another winner. The gentleman attempts to treat crowd members to a smoke show in his fifth generation Chevrolet Camaro SS, except we’re pretty sure he has no idea how to turn off the Stabilitrak.

The poor Chevrolet Camaro owner revs up the engine, and dumps the clutch to small tire squeals and comes to a complete halt. He does this not once, twice, is the third time a charm? Incorrect! The crowd truly tries to help the poor guy by offering advice to hold down the traction control button to disable the power cutting technology. Our stubborn driver dismisses it with a fourth try, with similar results. Finally, the story of our burnout failure comes to a close with a fifth go at it. He goes out with a bang. No really, something snaps and we kind of think it was the driveshaft or transmission.

We have to agree with the camera man’s last words here, “Okay, all done. Next!” Watch for yourself in the video down below.