For one reason or another, GM has two global midsize trucks that are more different than they are alike. Of course, we’re referring to The General’s two Colorados: the International-market Chevrolet Colorado (available in markets outside of North America) and the North American-market 2015 Colorado (and 2015 Canyon). Although they’re visually and mechanically different, both Colorados undergo similar development and testing procedures. Take, for instance, tests to ensure the trucks are resistant to water intrusion.

“Truck customers around the world expect to get to their destination no matter what’s happening outside the vehicle – be it a flooded road, river crossing or storm,” said Kevin Dunn, GM global vehicle performance owner for splash contaminants. “When you think of all the sensitive equipment on trucks these days it is critical to ensure that Colorado customers will never have to worry about how their truck will perform under extreme conditions.”

From drunk tanks to water booth tests to flooded trenches, GM puts the trucks through a series of tests at its Milford Proving Ground in order to ensure that the truck performs well in wet conditions. The tests include:

GM’s dunk tank simulates static water fording, like when customers are idling in deep water during flood conditions like those that frequently occur during Thailand’s rainy season.

First, the truck is driven into the dunk tank. Then, water floods into the tank up to the truck’s rocker panel. This allows engineers to examine the effect on underbody and chassis components, such as electrical wires and venting systems. The dunk tank is the newest of GM’s water tests, inspired in part by the kind of severe flooding that occurred in Thailand during the 2011 monsoon season.

GM’s universal water test booth uses 330 nozzles to spray 3,123 liters (825 gallons) per minute for eight minutes from the bottom, sides and top. The test helps determine long-term reliability by testing the robustness of a vehicle’s door and window seals to ensure no water leaks into the cabin during a severe rainstorm or other wet conditions. The test also helps ensure that water doesn’t interfere with powertrain venting systems and other underbody components.

The universal water test booth also enables a test that simulates the kind of misty conditions found in places like northern Thailand, when a fine mist can creep into areas of a vehicle that larger drops of water do not. This can potentially create a leak by having water wick through weatherstrips with low compression.

GM’s 15-meter outdoor deep fording trough is designed for slow treks through water, like a stream crossing during a camping trip when water intrusion can compromise transmission fluids and powertrain components like the rear exhaust.

“Hopefully, most of our truck customers will never have to deal with extreme water conditions, but in case they do they can take solace in the fact that we’ve designed our vehicle components to handle it,” Dunn said. 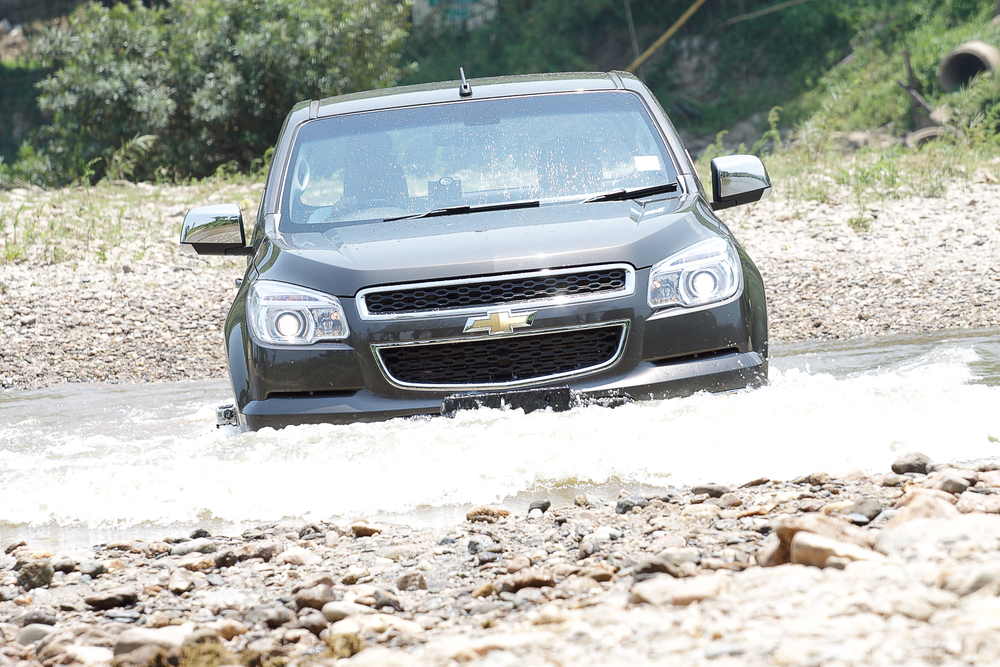 Fording through some water