As the spy shots and videos continue to trickle into GM Authority‘s offices, we are beginning to get a slight idea of what the 2016 Camaro is going to look like. Thanks to the renderings by the folks at Top Speed, we’re one step closer.

We’ve seen test mules running around metro Detroit and while the Camaro doesn’t look drastically different, the proportions are better, the shape is cleaner, and that small-block exhaust note is present and accounted for. Hence, if you were hoping for a new Camaro that copped themes from other-generation Camaros, you may be disappointed to see the 1967-69 influence will continue, no doubt due to the current Camaro’s sale success (and first-place standing in the ponycar market).

With the Alpha platform, the 2016 Camaro will become lighter, sleeker and more dynamic. And considering how high the bar has been raised with the 2015 Ford Mustang, the 2016 Camaro will have to do everything it can to stand out from a driving standpoint. But with what we’ve seen from the fifth-generation family in track stars such as the Camaro Z/28 and Camaro SS 1LE, we have complete faith in this.

The interior of the current Camaro harkens back to 1969, but considering the 2015 Mustang’s upgraded interior, it’s likely that Chevrolet will invest in better quality appointments. Under the hood, we wonder if Chevrolet will offer a competitor to Ford’s 2.3L EcoBoost turbo-four? Already Cadillac is using a 272-horse 2.0L turbo-four that propels the ATS to 60 mph in 5.7 seconds, so why not?

The 323-horse 3.6L V6 could be the mid-range engine at launch, but there is a new V6 around the corner to replace it. As for the V8, there’s the mighty 6.2L pushrod LT1, which first debuted in the 2014 Corvette Stingray. Transmissions are anticipated to be a seven-speed  manual and an eight-speed automatic transmission.

Top Speed created a series of renderings based on camouflaged spy photos − what do you think? 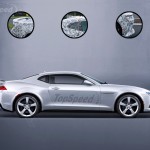 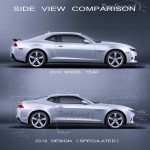 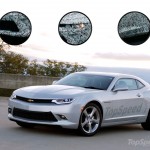 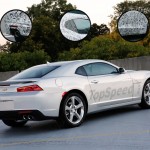 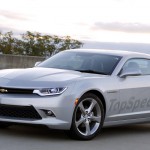