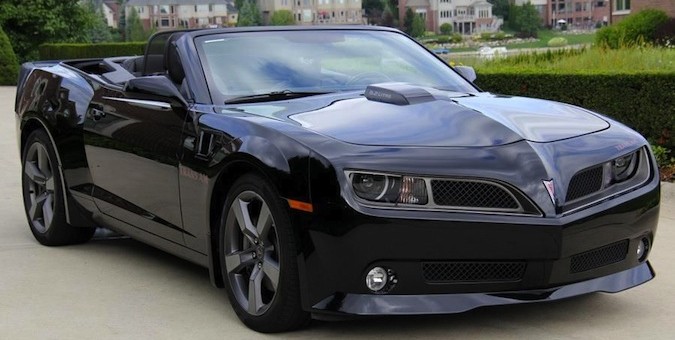 In our wildest dreams, Pontiac is still around today offering a slightly altered version of Chevrolet’s fifth-generation Camaro. Unfortunately that’s not the case, but Pontiac fans have made-do anyway, offering up aftermarket Trans/Am conversion kits for Chevy’s latest pony car.

One of these converted Camaros recently went up for sale on eBay, however it’s not a Lingenfelter T/A conversion kit like we’ve previously featured. Lingenfelter’s kit is styled after a 1970 Trans-Am, while this “Z/TA” package appears to mimic a 1977/78 model-year vehicle.

We actually think this package looks pretty good and it probably isn’t too far off what a Pontiac-built fifth-gen Camaro would actually look like, but we’re not on board with the price. The ‘Buy It Now’ price is $42,900, which could get you a very well equipped 2014 Camaro 1LE. By comparison, Kelley Blue Book places the value of a 2012 Camaro SS Convertible with an RS pack and similar options to this car at around $30,000.

We don’t really see any modifications here which justify a $13,000 price premium, but maybe the seller will take a lesser offer if the car sits on eBay for a little while longer. The car came with all the right options from the factory, such as the 6.2-liter V8 engine, a 6-speed manual transmission and leather interior, so it’s bound to attract a Pontiac fan looking for a modern day musclecar with an arrowhead on the nose.