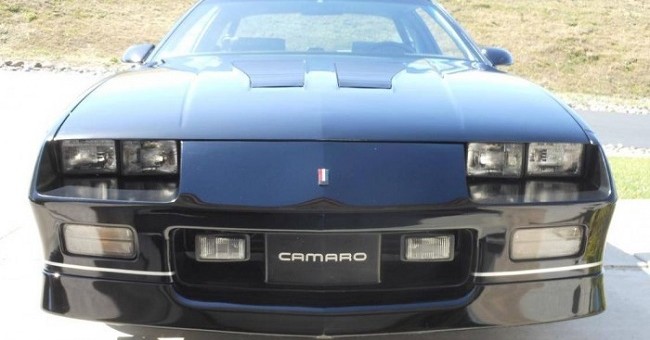 We’re not sure what it is about third-generation Camaros, but it seems difficult to come by one in decent shape. They’re not quite old enough for collectors to start scooping them up and restoring them and they’re cheap enough for any teenager with a brick for a right foot to buy. If it’s crash- and rust-free, there’s a good chance its located somewhere in the south, such as this mint 1985 Z-28 IROC-Z in Rio Vista, CA.

This Camaro, currently for sale on Hemmings, is one of the cleanest third-gens we’ve laid eyes on. The seller says the car was always garaged and covered, has never been in an accident or dented and has never even left the state of California. The paint, seats, carpet, wheels, 5.0-liter V8 engine, transmission and everything else are all original. It even has the original Goodyear Gatorback tires, which were standard fare on IROC-Z Camaros.

The T-Top option wasn’t chosen for this car, but despite this, it’s very well-equipped. There’s power windows, power locks, power tilt steering, a power radio antenna, cruise control, 4-wheel disc brakes and more. Its occasional outings from the safety of the garage has left it with only 17,000 miles, which means it’s barely been driven in the 30 years the seller has owned it.

We believe the seller when he says we “will not find a cleaner, more original 1985 IROC-Z” but we’re also not sure if he’ll get any takers with the $18,500 asking price. The car is definitely worth that much, but we can’t help but think the market for mint-condition third-generation Camaros is miniscule. These could be worth a lot more one day though, so maybe someone with good collector car market foresight will pick it up.

Check out the listing here.