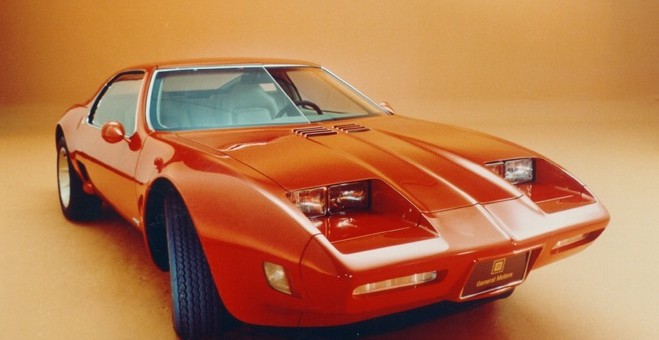 As we continue to look back at the mid-engine Corvette prototypes that Chevrolet has produced over the years we turn to one of the most radical of them all, the two-rotor 1973 XP-897GT Corvette concept.

The XP-897 was a continuation of the 1969 XP-882 and 1972 XP-895 mid-engine concepts that came before it. It was built with the purpose of showcasing General Motors’ new 266ci 180 horsepower Wankel rotary engine and its new automatic transaxle being developed for the upcoming X-Body Chevrolet Citation. The car, with its Pininfarina-designed steel body, quirky rotary engine and Porsche 914 chassis, was unlike anything GM had ever produced.

The 2-rotor Corvette made its debut on the auto show circuit in 1978 in Frankfurt, Germany. It later made the rounds to all the major auto shows until GM decided to cut its rotary engine program due to poor emissions and mileage. After its British Motor Show debut, it was put in storage in the UK without its Citation transaxle or its Chevrolet rotary engine.

Chevrolet wanted to crush the XP-897GT as it was a reminder of the huge waste of time, money and resources its Wankel rotary engine program had been. Englishman Tom Falconer heard from a friend that the steel-bodied Wankel Corvette was headed for the crusher and frantically contacted then-head of GM’s styling department, Chuck Jordan, telling him he’d like to purchase the car. The two arranged a meeting at the GM Tech Center in Michigan and Stevens eventually agreed to let Falconer keep the car.

Because it was missing its transaxle, Falconer had to get creative with the powertrain when trying to rebuild the car. Initially he equipped it with a four-cylinder engine from a Vauxhall Cavalier just to get it going, but later swapped in a Mazda 13B rotary engine that was more in the spirit of the engine the car originally had. The transmission was sourced from a Cadillac front-wheel drive unit and Falconer had the car repainted in its original Candy Apple Red color, as it had been repainted to silver while making its auto show rounds.

The XP897GT is still owned by Falconer today, where it resides in his car collection in Snodland, Kent, England.