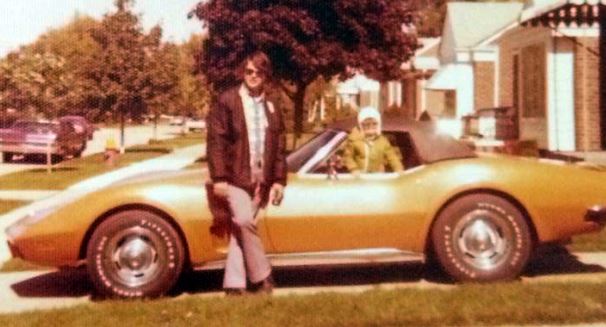 There are plenty of stories of Corvette owners departing with their beloved machines at one point, but years later after circumstances change in one way or another, they track their pride and joy down and reunite. In essence, it’s a car enthusiast’s version of a lengthy romance novel.

Get ready to add an extra special chapter to this ongoing novel, because a Detroit man has taken this story a generation further. Scott Bachmann searched, and found his late father’s 1973 Chevrolet Corvette. He was interviewed by local CBS affiliate AM radio station WWJ to find out more about the Corvette and what it means to Bachmann.

“This is a 1973 Stingray Corvette convertible,” he told WWJ. “It’s Ontario orange, the original paint. This was my father’s car back when I was 3-years old.” Scott said his father was a devoted Corvette enthusiast, and cared for his Corvette with everything he had. Sadly, he passed away in 1977 from suffering a stroke working on the car. The above photo shows Bachmann’s father standing next to his Corvette, while Bachhman peaks out the driver’s side window.

Determined to find a connection with his father all these years later, he instantly knew what would provide the greatest memories: the ’73 Corvette. Luckily, Bachhman knew the VIN of his father’s Corvette and with the help of modern technology, and registering of VINs from Corvette enthusiasts around the country, the task proved easier than first thought. The Corvette had been located and he contacted the then-current owner. Good news for him, the owner was willing to entertain an offer. “It was considerably more than my father payed for it”, he said. “But it was worth every penny.

Only 4,943 1973 Corvette Convertibles were sold that year, and his father’s only reads 80,229 on the odometer. The Corvette remains in good shape all these years later and sits with the original engine and transmission. Bachmann remarked the ‘Vette has reached its final destination, and won’t be departing any time soon.