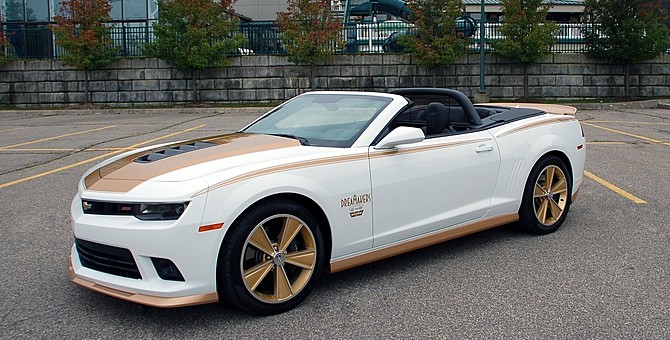 Jack “Doc” Watson may not resonate with you young ‘uns, but he’s a muscle car god to folks who were alive in the 1960s. Watson was the Hurst Shifty Doctor, going from drag strip to drag strip to help racers fine-tune or fix their Hurst shifters, not to mention he created both the 1966 Hurst Hairy Oldsmobile and the 1968 Hurst/Olds. He’s also the guy who created this commemorative 2014 Camaro convertible that will be auctioned by Mecum in Chicago between now and October 11, 2014.

From what we can tell, this Camaro is one of 100 convertibles that was announced at last year’s SEMA show. This one in particular has been donated, with the proceeds to benefit the 501-C3 Dreamakers International Kids Alliance Network, which is a charitable organization that promotes literacy programs for youths.

Equipped with front and rear spoilers, roll bar, wind protector, Hurst Gold wheels, Hurst shifter backing the 6L90E automatic, 3.27 rear, and unique paint, graphics, and emblems that harken back to the heyday of Hurst, it certainly doesn’t look like all the other bellybutton Camaros out there.

Does it ring your bell? You better make it to Chicago now because the auction’s just started!