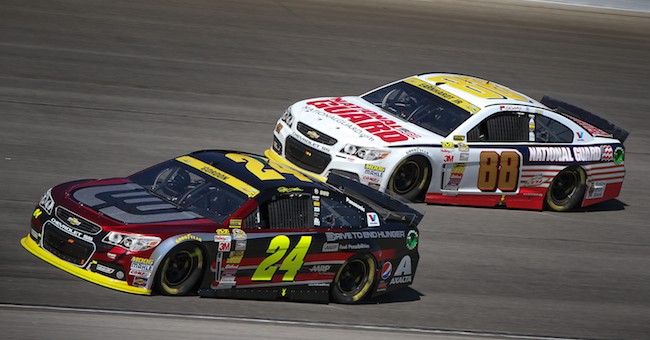 Remember when we pointed out how strong Dale Earnhardt Jr.’s season was, making it that much more disappointing he was knocked out of the Chase for the Sprint Cup at Talladega? Well his display of dominance over much of this year’s NASCAR field isn’t over, after the 40-year old drove to his first-ever win at Martinsville Speedway Sunday.

You’d think the result would be bitter sweet for Earnhardt, whose championship hopes were crushed after he was wrecked at Talladega last week. But he was all smiles Sunday, as the win marked the Team Chevy driver’s 30th outing to Martinsville, a place where the late Dale Earnhardt won six times. It’s also just two hours north of his North Carolina home, making it a special place for Junior.

“I could care less about all the points by now,” Earnhardt said post-race. “We love winning races. Winning races is the best thing.”

Jeff Gordon finished second behind Earnhardt, making him first among the eligible Chase drivers who are left. Gordon, the sole Hendrick Motorsports driver left in the Chase, now sits first in the standings ahead of Chevy’s Ryan Newman and Ford’s Joey Logano.

Other Chevrolet drivers in the top ten at Martinsville were Tony Stewart and AJ Allmendinger, neither of whom are left in the Chase. Some drivers still competing for the Sprint Cup had particularly rough races, including Brad Keselowski, who suffered a blown transmission early on.

The next race in the final ‘Eliminator’ round before the Championship race next month will take place at Texas Motor Speedway on Nov 2nd. That race and the following Quicken Loans Race For Heroes 500 at Phoenix on Nov. 9th will decide the final four drivers who will advance to the Championship Round at Miami-Homestead.