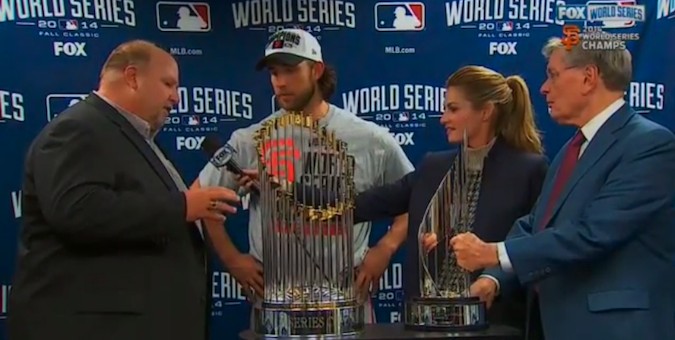 General Motors awarded this year’s World Series MVP, San Francisco Giants’ pitcher Madison Bumgarner, with one of its all-new 2015 Chevrolet Colorado mid-size pickups. Chevy hoped the post-game chatter on Twitter and other social media outlets would be about its new truck, but the man in charge with giving the keys over to Bumgartner, Rikk Wilde, accidentally stole the show.

Wilde, who isn’t used to public speaking in his position at GM, was tasked with giving a short presentation speech about the Colorado to Fox’s television audience before giving Bumgartner the vehicle. That sounds easy enough, but Wilde managed to botch his opening statements pretty badly.

Via The Detroit News:

“As the official sponsor, or the official vehicle, of major league baseball, Chevrolet is proud to participate in this prestigious award,” Wilde said. “Um, along with our dealers, we are also extremely honored to give back to this sport, uh, by supporting baseball in cities and towns across this nation. At Chevrolet we have, uh, we have also been proud of of the latest and greatest, uh, technology in our truck lineup, which is the all-new 2015, uh, Chevy Colorado. Um, it combines class-winning and leading, um, you know, technology and stuff with, uh, Wi-Fi powered by OnStar…”

To be honest, we feel kind of bad for Wilde.  GM spokesman Mike Albano said Wilde is a “life-long Kansas City Royals fan, so he was suffering the woes of having watched his team just lose Game 7.” He also added that Wilde’s “day job is selling cars and trucks and that’s what he’ll be back doing again today.”

There’s a good chance you’ve been given a task at work you’re not normally used to doing and made an embarrassing mess of it. The only difference between you and Wilde is he had the United States’ massive World Series Audience watching his every move. You’d probably be pretty nervous, too.

For some reason, the media really ran with Wilde’s minor screw up. One particularly rude Washington Post writer noted he looked like “a sweaty car company representative who sounds like he is battling cardiac arrest.” Classy.

Albano noted everything Wilde said about the Colorado was true, confirming there is indeed “a lot of stuff in the Chevrolet Colorado.” In our opinion, his embarrassing 15-minutes of fame could have been much worse. Check it out in the video below (if you can survive the awkwardness) and let us know what you think in the comments.