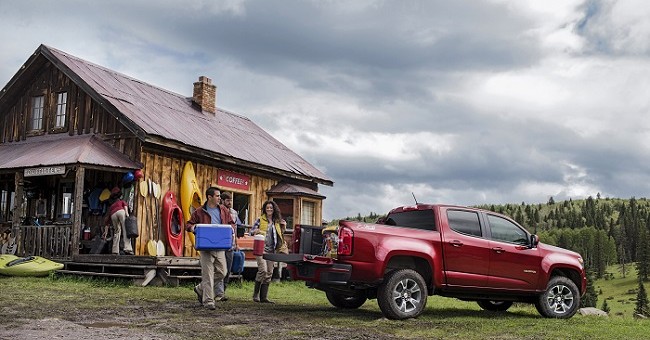 General Motors hosted its Detroit-area regional truck drive for select members of the media earlier this week. The event, appropriately held at the Open Hunt Club in Bloomfield Hills, MI., gave journalists the opportunity to drive several of its all-new truck and SUV offerings for the 2015 model year, including the all-new 2015 Chevrolet Colorado and 2015 GMC Canyon.

We’ve already driven and reviewed the two highlights of the event, the Colorado and Canyon, but GM’s regional truck drive also gave us the opportunity to mingle with some of the key people in charge of its mid-size truck onslaught. The automaker hopes to appeal to many different types of customer with the Colorado and Canyon, including younger buyers and current SUV/crossover owners, so the marketing approach taken with the two trucks will be crucial to its success.

GM believes former mid-size truck owners fled the segment and went to crossovers as the offerings became more lackluster, such as the relatively barren Nissan Frontier and Toyota Tacoma. Now, both Chevy and GMC are hoping the comparatively high quality interior and array of technologies offered in the Colorado and Canyon will make crossover owners reconsider a pickup.

Director of Chevrolet Marketing, Sandor Piszar, recognizes that appealing to crossover buyers and younger demographics will require a different marketing strategy than that taken with full-size pickups. He said a large amount of crossover buyers are “younger and digitally savvy,” so touting standard technologies like OnStar’s 4G LTE Wi Fi hotspot and the rear-vision camera will be a large part of the Colorado’s marketing campaign.

Piszar also told us to have a close look at the Colorado’s mini-site, which he says is the most immersive of any of Chevy’s products. This was a main focus for the Colorado marketing team, as younger buyers ware more likely to go to the internet to research a vehicle rather than the dealership. When compared to the Silverado’s webpage, the Colorado’s is more user-friendly, filled with large interactive buttons and information on its Wi-Fi capabilities, 8-inch color touch screen and other new tech.

Another large focus of the Colorado/Canyon marketing teams was appealing to existing mid-size truck owners. According to GM, around 250,000 new midsize trucks are sold each year, yet there are 12 million midsize trucks currently on the road. As a result, there is an untold amount of midsize owners looking for a replacement, but are uninterested in the aging Tacoma or Frontier. This is where GM will step in with its larger mid-size offerings chalk full of technologies previously not offered in the segment.

“This is one of the most dissatisfied segments,” Piszar said.

What’s true for Chevrolet is also true for GMC. They hope the Canyon’s even more upscale interior will attract buyers who may be coming off a well-equipped SUV. The Canyon’s more grown-up looks and soft-touch interior may make it the truck of choice for families, while the Colorado could appeal to the aforementioned younger demographic.

There are many who doubt GM’s ‘three-truck’ strategy, which consists of the mid-size trucks, its full-size Sierra and Silverado and the HD Sierra and Silverado. Among them are Ford and Ram, who abandoned the segment after concluding that the demand was minimal. GM argues that demand is only minimal because consumers have been left with barely any choices in the segment and now its trucks are entering an almost entirely untapped market. It’s a big gamble, but if GM and its marketing team turn out to be right, the payoff could be huge.