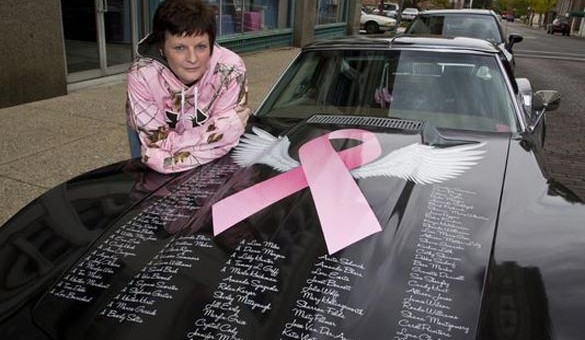 After surviving her battle with Stage IV breat cancer, Jenifer Barnett did something remarkable with her 1974 Chevrolet Corvette, turning it into a rolling billboard to raise breast cancer awareness.

Barnett received chemotherapy to treat her breast cancer, which by the time it was caught, had spread to her liver, as well. Thankfully, she survived, and the tumor in her liver has been pronounced benign by her oncologist.

But understandably, it was a life-changing experience for her. Her response was to take her classic, 1974 Chevrolet Corvette and have it wrapped, with the names of fellow sufferers of breast cancer on the doors and hood. One-hundred names are on the hood, those of fellow survivors, with a small ribbon painted next to a name of any person who survived Stage IV, like she had. Fifty names are on each door, more somberly those of women who had lost the fight against breast cancer.

Jennifer takes the car to various public events to help raise awareness, and in the occasional event that she meets someone currently undergoing chemotherapy, she’ll even take them for a ride in it.

We here at GM Authority think that’s an awesome use of a Corvette, and we wish Ms. Barnett the best of luck.