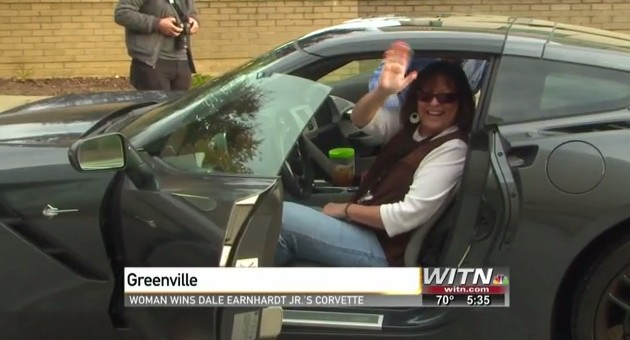 Earlier this year, the Dale Earnhardt Jr. foundation announced it was raffling off Dale Jr.’s personal ride of choice, a 3LT 2014 Corvette Stingray equipped with the Z51 performance package. There were 8,888 tickets on sale for $25 each, with all proceeds benefitting underprivileged children. One North Carolina resident, Wendy Smith, bought a single ticket for donation’s sake, knowing she probably wouldn’t win.

Wendy was never happier to be wrong. After finding out her ticket was the lucky winner, she drove down to Mooresville, N.C. to pick up the car. The well-equipped Cyber Gray ‘Vette came with black 19-inch Z51 wheels, a carbon fiber dash, a carbon fiber dual roof package and the Bose ten-speaker audio system.

The win could probably not have gone to a better person. Wendy has battled cancer successfully twice in the last seven years and was recently diagnosed with the condition for a third time. Despite this, Wendy believes she is no more deserving of the Stingray than any other contestant, but she’s still happy she was the winner.

“I don’t know that being sick makes you any more deserving than anyone else,” she told WITN. “But it’s certainly been a blessing. And I’ll take it!”

When she went to pick up the car, Dale Jr. himself was there to pay all the taxes and additional fees for Wendy. She said her and her family has some bills they’d like to pay off, so they will likely sell the car, but said “were going to have a little fun with it first.” That’s a great idea, but one drive in a C7 and you’re hooked, so Wendy may end up holding on to her new sports car for a little longer than she anticipated!