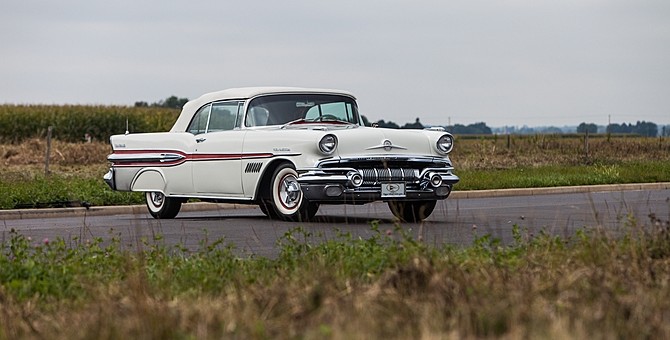 When Bunkie Knudsen took over Pontiac in the mid-1950s, he set out to change the brand’s image. Seeking something a bit more youthful − Pontiac had an image fit for librarians − he got Pontiac into racing to prove its mettle. He also introduced the 1957 Bonneville convertible as a showcase for a fuel-injected 347 as well as a sporty cruiser to be a halo car for the brand. This one will be auctioned off at Mecum’s Anaheim auction on November 13-15.

Priced at $5,782, the 1957 Bonneville was more expensive than any other Pontiac by at least $2,000. However, it had just about every feature as standard equipment, including white-wall tires, spinner wheelcovers, anodized-aluminum trim, Strato-Flight Hydra-Matic transmission, power steering and brakes, heater/defroster, light package, “Wonderbar” signal-seeking radio with electric antenna, eight-way power seat, power windows, power top, leather upholstery, deluxe carpeting, and more.

However, the piece de resistance was the fuel-injected 347. Fuel injection had already been introduced for Chevrolets earlier in the year, but until then it was merely an exotic piece of equipment that very few cars in the world could claim to have. Still, the Bonneville was more of an athlete in a tuxedo rather than an athlete in uniform, so one could expect a nicely tuned Tri-Power Chieftain to beat it.

At the end of the model year, only 630 1957 Bonnevilles were built. While 1957 Pontiacs are not strong collector cars, the Bonneville has been the exception for years, being a strong collectibles for years. Their rarity, exotic hardware, and place in Pontiac’s rebranding efforts have made them a desirable 1950s cruiser even before GTOs started to become popular. If you want to snap this one up, be sure to be at Mecum’s Anaheim auction in California in less than a month.

In 1958, the Bonneville’s limited-edition status was discarded, becoming Pontiac’s top-of-the-line model along with the addition of a hardtop. By 1959 and the introduction of the “Wide-Track” Pontiac, the Bonneville became a full-fledged model with all kinds of bodystyles and completing Pontiac’s turn-around.