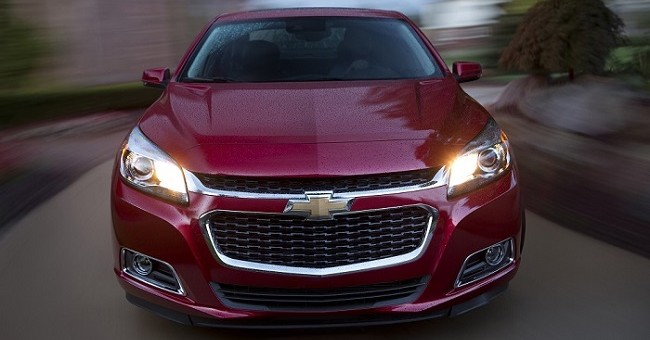 Unfortunately, the 2016 ‘Bu hasn’t shed any of its camouflage for these latest photos. The thick black camo is still covering much of the car’s body, however its Audi A7-like fastback shape and some other small styling elements can still be seen.

The new Malibu will likely feature more modern, youthful styling over the current car. From what we can tell, a variation of Chevrolet’s two-tier grille may be carried over from the current eighth-generation Malibu to help keep it in line with the other Chevys, but apart from that, we think this new model will end up looking very different from the last.

There are no rumors hinting at what might sit under the hood of the new Malibu, but we have a few well-educated guesses. Chevy’s current 2.5-liter LCV four-cylinder engine will likely be carried over along with the 2.0-liter turbocharged LTG engine. Us and many others think the V6s will be tossed out the window, just like Ford did with their second-gen Fusion.

Speaking of Ford, GM’s new nine-speed transmission for front-wheel drive applications it’s developing with the Dearborn-based automaker will eventually see duty in the Malibu. This, combined with small four cylinder engines and improved aerodynamics, will result in a much more efficient car. If you’re extra earth friendly, a hybrid model may also be on the table.

Check out the spy photos here.