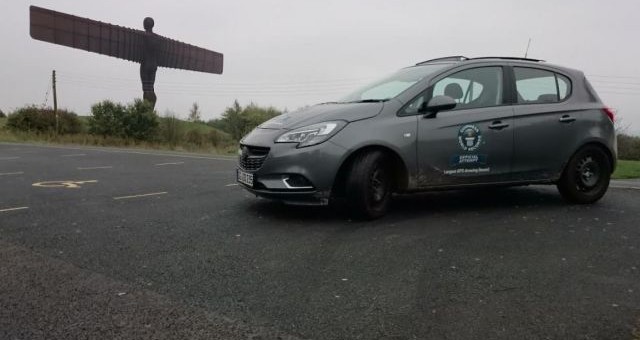 Ever hear of GPS drawing? That’s a new one for some of us at GM Authority, but it seems a 2015 Vauxhall Corsa prototype is en route to set a Guinness World Record for the “Largest GPS Drawing” as it traces its location via satellite while driving through the UK.

The Corsa’s driver is none other than GPS artist Jeremy Wood (yes, there are famous GPS artists out there), who has been creating “digital marks” on water, land, and in the air for more than 10 years. Believe it or not, his work has been exhibited at the London Transport Museum, the Victoria and Albert Museum, and the University of Arts in London.

“This is by far the most challenging commission that I’ve taken on. In order to make the image instantly recognisable, I’ve driven the new Corsa on a huge mix of roads and travelled some of the most convoluted routes to ensure that the outlines are clear and memorable,” says Wood.

According to Motoring.co.uk, highlights so far include visiting the England/Scotland border, cruising passed Salisbury Cathedral, and seeing The Angel of the North in Gateshead.

PR Manager for Vauxhall Product & Heritage Simon Hucknall added, “Corsas can be found in every village, town and city around the UK – so we wanted to visit as many locations as possible during the record attempt to raise awareness of the new car. We also wanted to create a truly unifying image using modern technology.”