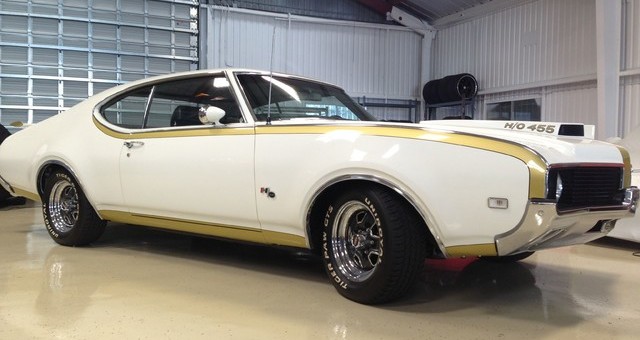 General Motors may have been King in the 1960s, but that didn’t mean they were competing on equal terms with Ford and Chrysler. With a racing ban in 1963 and a limit of cubic inches to certain cars save the Corvette, the muscle car offerings were somewhat limited when the competition was fielding 7-liter behemoths. That all would change with the Hurst/Olds.

When it was introduced in 1968, the Hurst/Olds broke GM’s cubic-inch ban but, then again, it was modified by Hurst. All cars were ordered in a special-order Toronado color called Peruvian Silver and given black accents and the trunklid was also painted black. Under the hood was a massaged 455 from the Toronado rated at 390 horsepower (while the 4-4-2 had to make do with a 400 per GM’s rules) and given the Oldsmobile Air Induction plumbing that fed cold air to the air cleaner from under the bumpers. But here’s a little secret: Oldsmobile actually installed the 455s against GM policy, not at Demmer Engineering’s facility (the subcontractor for Hurst).

Characterized as the “Executive Supercar” by the press, the 1968 Hurst/Olds was considered a success with 515 built, so it was continued for 1969 . . . but oh my, what a change! While the 1968 H/O was understated elegance, the 1969 H/O was in-your-face. Ads proclaimed “Snarls softly and carries a big stick…” Along with the usual model-year updates, the new H/O received Cameo White paint with Firefrost Gold accents. Most distinctive, however, were the flying rear spoiler and hood scoops that resembled mailboxes. Under the hood was the 455 but now demoted to 380 horsepower due to a slightly smaller cam. People didn’t complain − in fact, they continued to show love and at least 912 were built.

For 1970, there was another Hurst/Olds proposal, but it just didn’t happen. Perhaps it was because GM lifted its cubic-inch ban and the 4-4-2 was now available with the 455? Whatever the case, the proposed H/O became the Rallye 350, another performance model that wasn’t bashful in the least.

This 1969 Hurst/Olds on eBay is claimed to be largely original, with only a repaint changing its status from a survivor. The original decals under the trunklid and in the door jambs are still there. Showing just over 50,000 miles, it is said to drive like a new-old car. Got 90 grand? That’s the cost of entry for this one.