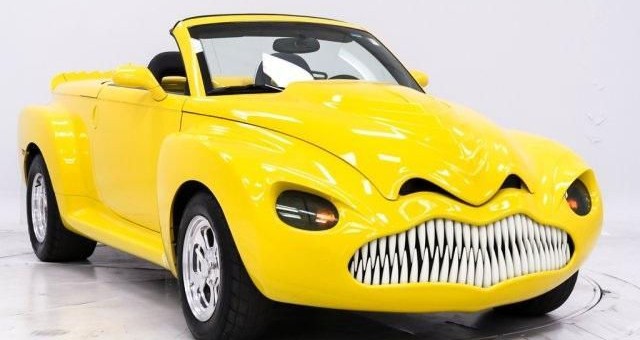 The Chevrolet SSR’s looks were somewhat controversial to begin with and contributed to its lowly sales of only 24,000 units in the three years it was produced from 2003 to 2006. Whether you’re a fan of the SSR’s retro contemporary styling or not, we doubt you’ll be a fan of this heavily modified example currently for sale on Cars.com for $34,988.

As you can see, the car has been given a few modifications which appear to have been inspired by Jurassic Park. The fiberglass body kit seen here is complete with reptile eyes, a lizard-like snout, a boot spoiler reminiscent of a dinosaur’s tail and of course, a set of sharp teeth in the grille. The seller’s also given it the appropriate nickname of the DinoSSauR, which might also make a nice vanity plate.

This might be one of the ugliest SSRs we’ve ever seen, but at least it’s well-equipped. It comes with the 6.0-liter LS2V8 and a six-speed manual gearbox rather than the 5.3-liter Vortech engine and four-speed automatic. It also comes with a Magnaflow exhaust, the sport suspension package, heated and memory front seats and more. It’s also covered just 6,468 miles since 2005.

The most interesting part about this ad is the seller. The dealership, North Freeway Hyundai just outside of Houston, says they are the largest Chevrolet SSR dealer in the world, having moved 350 of the half pickup half car oddities. They also say they get offered strange custom builds like this all the time and usually decline them, but they just had to have the DinoSSauR. We’re not sure if we understand why, but if they think they can sell it, more power to them. Check out the listing here.