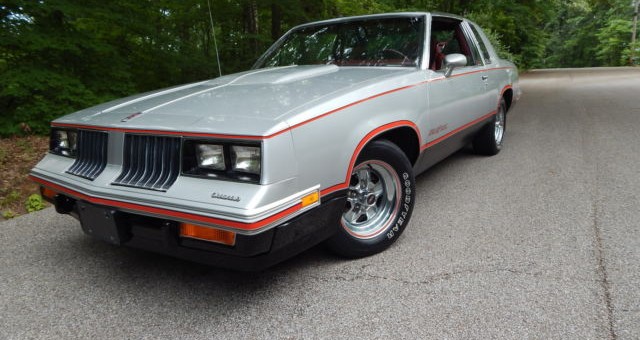 On the 15th anniversary of the when the very first Hurst/Olds car was introduced, Oldsmobile revived the collaboration in the way of the G-body Hurst/Olds Cutlass Supreme. The car featured the signature Hurst Lightning Rod shifter, a model-specific paint scheme, new Hurst/Olds logos, a rear spoiler and other unique features. It can be hard to come by a G-body Hurst/Olds in decent shape, so this mint 1984 Hurst/Olds Cutlass we found for sale on eBay immediately caught our eye.

The paint on these cars, which was either silver or black depending on the model year and separated with contrasting red stripes, was notorious for chipping and peeling. Unlike other examples of the car, this vehicle has immaculate paint and has not had to be repainted, nor have any of the parts been replaced, making it an all-original survivor car. It’s also had only one owner, who bought it new from a dealership in Jasper, IN. in 1984 and stored it in a garage ever since.

All Hurst/Olds cars like this came with the Oldsmobile 307 V8 with a four-barrel carb putting out 180 horsepower. In 1984, the Hurst Lightning Shifter also became available, which allows the driver to shift into first and second using two different levers, which can make for faster shifting at the drag strip. This particular car also has the T-Top, which was an $825 option from the factory.

We have a bit of an affinity for G-body Oldsmobiles, and this car is just oozing desirability from every single one of its panel gaps. The $25,000 asking price is a tad steep in our opinion, but this probably one of the few mint condition, all original 1984 Hurst/Olds cars still around today. Check out the listing here for more photos.