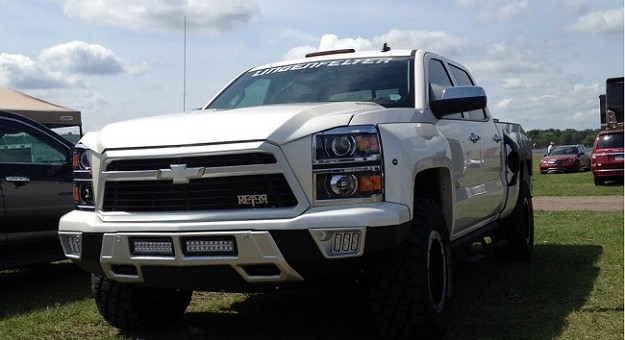 General Motors has yet to release a direct competitor to Ford’s successful F-150 Raptor program based on the Chevrolet Silverado, so Lingenfelter Performance Engineering and Southern Comfort Automotive joined forces and did it themselves with the Reaper. We’ve been highly curious about how the aftermarket Reaper would stack up against Ford’s factory offering ever since we first laid eyes on it earlier this year and we may finally get an answer in Truck Trend’s new road test review of the pickup.

Much like us, Truck Trend’s interest was caught immediately upon laying eyes on the Reaper. LPE is immensely well respected in the tuning community and if we were to hand-pick anyone other than Chevy themselves to build a Raptor fighter, it would be them. The Reaper is no cosmetics package. LPE does things the right way, with Fox Racing shocks, 17-inch beadlock wheels shod in 33-inch off-road tires, a different bumper with more ground clearance, a skid plate and much more.

Arguably one of the most important aspects of the Reaper package is the Fox Racing Shocks. LPE claims claims 9.2 inches of front, and 11.2 inches of rear suspension travel on the Reaper. That’s less than what is claimed for the Raptor, however LPE spokesman Mike Copeland assured Truck Trend the Reaper will deliver no less than the exact figures promised.

So what’s it like to drive? Truck Trend says the Reaper handled the sandy Michigan dunes they drove on with “poise and confidence” and “rarely” maxed out its wheel travel while driving at speed. Their test model was equipped with the 6.2-liter supercharged engine which had what they described as “one of the louder exhausts we’ve heard in recent memory,” but also said it was “too loud for many buyers.” Performance was no issue, with the engine delivering 139 horsepower more than the Raptor’s 411 horsepower V8. Even the base 5.3-liter engine in the Reaper has a 69 horsepower advantage over the Raptor’s 6.2.

The improved suspension and added power of the Reaper made it a pleasure to drive both on and off-road. Truck Trend said the 6.2-liter engine’s “plentiful power and torque” powered it uphill with ease and on the highway, propelled it into triple-digit speeds even easier. As an added bonus, Copeland said he’s seen up to 17 mpg in the truck if you can somehow help yourself from standing on the pedal every chance you get.

In conclusion, the Reaper can “legitimately hang” with the Raptor and is a logical option for the Chevy fan with a friend that won’t quiet down about how great his Raptor is. It’s styling might not be for everyone, but LPE said a Reaper styling package may soon be available for the GMC Sierra, which may be a better fit for some consumer’s tastes. There’s not much they can do about that $70,000+ sticker price, but considering how easily it is for some GM full-size vehicles to creep into that pricing margin, we think the pricing is rather reasonable.

Read the full Truck Trend rundown of the Reaper here.