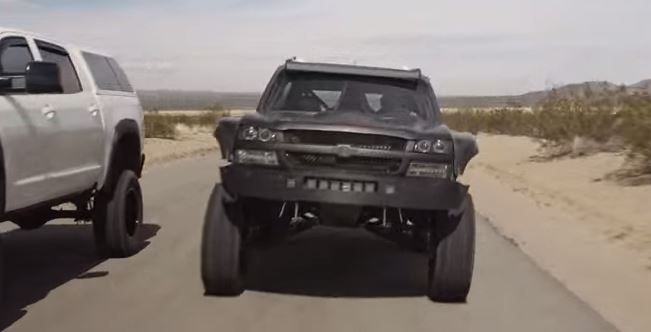 Tire manufacturer Toyo Tires put out this totally awesome ad for their new Open Country R/T tire to show off its confident performance – both on-road, and off.

The spot features two custom-built trucks — one Toyota and one Chevrolet K5 Blazer — both driven by off-road racing champ BJ Baldwin. The trucks duke it out to see whether the on-road white Toyota, or off-roading black Chevy comes out in front.

Sidenote: if you watch carefully, you can see that in some shots, the white truck’s window is down, and in others, it is up, presumably to hide the stand-in driver. BJ is, after all, only one man.

The conclusion: it’s basically a wash between the tire’s on-road and off-road competence. Or maybe BJ was in the zone that day, whereas BJ, the driver of the other truck, was not. Or maybe one of the trucks was seriously underpowered, but happened to be using the tire on the surface on which it excels.

Who knows what this commercial is trying to say. All that matters is that it’s awesome, and we love it.