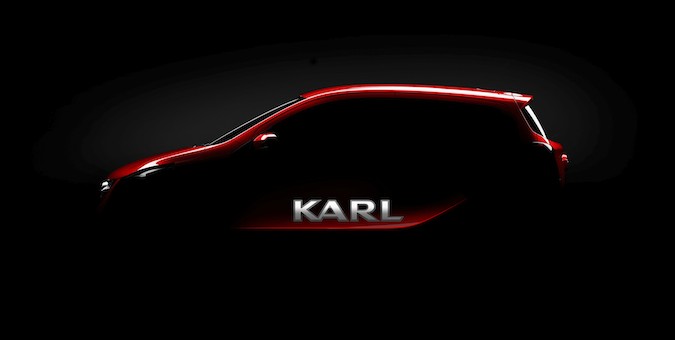 Yesterday Vauxhall teased its all-new affordable compact car and confirmed its name to be Viva, a nod to the successful Vauxhall Viva compact sold in the 60s and 70s. As expected, the Opel variation was also teased today, but rather unexpectedly, the German automaker revealed its name to ‘Karl’ rather than Agila.

The Karl will replace the Agila as Opel’s entry-level five-door compact. Opel says the Karl name is “short, snappy and catchy” and represents the brand’s core values: “German, emotional and approachable.”

Apart from the name, Opel also divulged a tiny bit more information about the upcoming compact than Vauxhall did. They say the car will be around 3.68 meters in length (about 12 feet) and have “up to five seats”. By comparison, the Adam is 12.1 feet long while the larger Corsa is 13.1 feet long.

The Karl name is meant to pay homage to Opel founder Adam Opel’s son, Carl. Adam Opel started the company as a bicycle manufacturer, however his sons Carl, Wilhelm and Fredrich turned the brand into an automobile company in 1898. The name could also be related to Opel’s current chairman, Dr. Karl-Thomas Neumann, although the automaker did not make that connection.

According to Reuters, the Karl will sell for around 10,000 euros ($12,926 USD) when it goes on sale next Summer following its likely debut at the Geneva Motor Show in March.