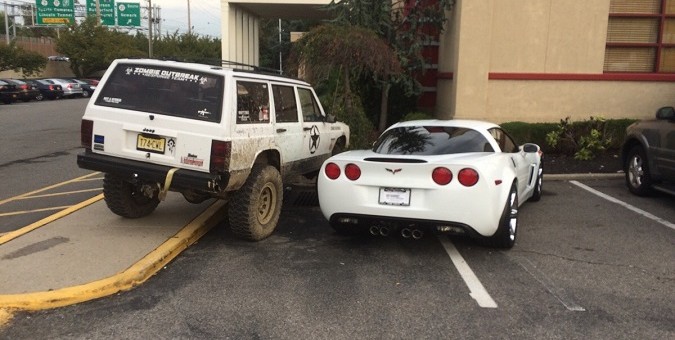 Here’s something that appears to be news to many sportscar owners: just because you bought a nice car, doesn’t mean you can park however you want. Parking like your car gives you some sort of special advantage only makes people want to mess with it more, like this Reddit user who decided to park his Jeep as uncomfortably close to one self-important motorist’s Corvette Grand Sport as he could.

Corvette Blogger found the photo and story after it was submitted to Reddit/r/pics by the owner of the white Jeep. He says he was stuck in New Jersey traffic for 2 hours and pulled into a semi-busy restaurant parking lot to grab a bite to eat. As you probably know, when one inconsiderate driver decides to take up two spaces it messes up the parking order for the entire row of spaces. Instead of taking up another two spots like our shamed Corvette driver here, the Reddit user parked his Jeep up on the curb right next to the Corvette.

Knowing you made the guy a little angry for ruining his parking job is normally enough, but having the opportunity to indulge in his frustration is even more satisfying. The Reddit user sat where he could see the Corvette in the restaurant and waited for the owner to come out, videotaping his reaction as he inspects his car for door dings. Then, just to rub it in his face a bit, two people walk by and laugh at the Jeep for messing with him.

Here’s a tip, if you don’t want your car to get scratched or dinged, park at the back of the lot where there are little to no cars and only take up one space. If you park upfront like you’re the only person on the road, someone is bound to mess with you. You don’t want to end up plastered all over the internet like the guy in the video below, do you?