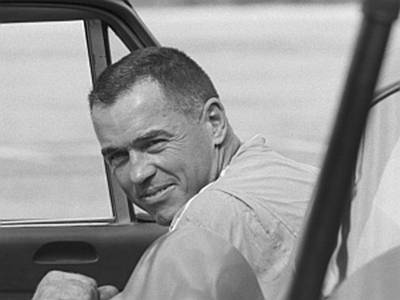 Corvette Racing legend Dr. Dick Thompson, aka the Flying Dentist, has passed away. Thompson was 94.

The Flying Dentist was arguably one of the best racers of his time. He is one of the dwindling few individuals remaining who helped put U.S. road racing on the map after WW II.

Coming to racing later in life at age 32, Thompson started with a bang when he entered the 1952 inaugural 12 Hours of Sebring. The story goes Thompson and his friend, Bill Kinchole, drove down to the race from D.C. to Florida in Thompson’s race car. When they arrived, they gridded the MG TC and drove it to an 8th place finish. Then, packed up and drove home.

This initial taste of racing lead to much more with Thompson becoming a racing star. During those days of racing, understanding and perfecting how to cut the corners to gain optimal speed wasn’t as advanced as today’s NASCAR racers. Thompson quickly mastered the curves and this lead to back-to-back SCCA F Production national titles with a Porsche Super and later with a Jaguar XK 120.

With Thompson’s racing reputation established, the late John Fitch recommended him Zora Arkus-Duntov, the father of the Corvette. General Motors and Duntov were looking to get the new Corvette into the racing scene and establish a following. Thompson agreed to race the car and quickly rewarded GM and Duntov with C Production and B Production titles in 1957 along with a GT class win at Sebring.

The Flying Dentist would continue to drive GM products including the new Corvette Stingray Racer.   This privately funded concept car was designed by a trio of GM employees including Bill Mitchell. Mitchell would arrange for the car to be raced quite extensively and enlisted Thompson’s help. With Thompson behind the wheel, the car finished fourth in its debut on April 18, 1959. It would go on to win the SCCA National Championship in 1960 before it was retired.

Thompson wasn’t done with Corvette Racing, though. He would add more national titles to his name through the 1960s. Later one, he switched to Ford and their new Cobras to win the 1965 GT Class. He also drove a Mirage to a 1967 win at Spa with teammate Jacky Ickx.