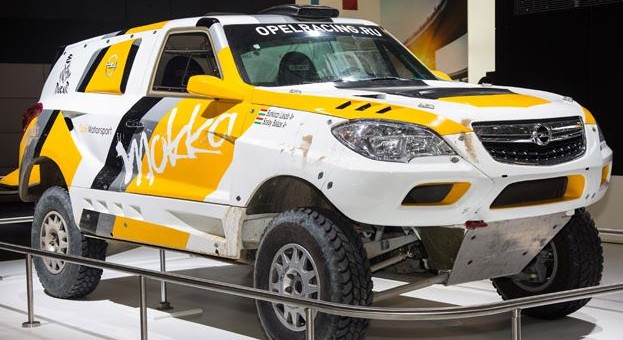 Ironically, the vehicle that is one of the most domesticated in GM’s portfolio — the Opel/Vauxhall Mokka (Buick Encore) — is slated to endure the legendary, perilous Dakar Rally this January.

For those not in the know, the Dakar Rally is a two week-long desert rally raid in South America – through Argentina, Bolevia, and Chile. It’s reserved for only the most extreme, purpose-built off-road machines. Stages vary in length, all the way up to 500+ miles per day.

How will the soccer moms’ commuter of choice cope with the pressure? With modifications, of course. This rally variant now has a 6.2L V8, putting out a peak 340 hp and 487 lb-ft.

This Dakar-prepped variant is also lifted 250 mm to allow it to brave the harshest of pits, ruts and rocks (yet still likely scrape on Michigan’s obscenely pock-marked roads), and it’s been given a 137 gallon fuel tank. For some perspective, if your daily driver accomplishes around 30 mpg on average, that would give you a range of over 4,000 miles.

There are also (obviously) changes to the body, including plenty of carbon-fiber pieces, and a massive wing to make all those Subaru STI drivers green. We’ll be watching this Mokka Dakar racer very closely come January.