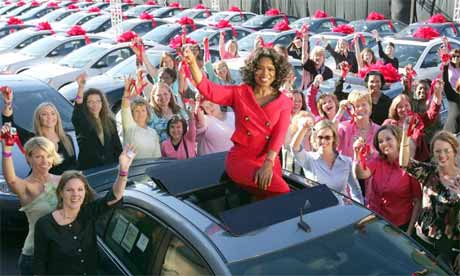 Ten years ago this week, Oprah pulled off her car giveaway with Pontiac G6 sedans. This event full of theatrics made for great television, yet it in the end, the stunt wasn’t enough to save Pontiac.

The 276 Pontiac G6 sedans were given away during the opener to the 19th season of the Oprah Show. Oprah used all of her showmanship skills in building up the event that ultimately stunned the audience and made national news.

For Pontiac, the one-time exposure was enormous and likely outweighed the reported $7.7M cost of giving away the cars.

The event wasn’t without controversy though since each car had a pretty steep tax bill of $6,000. For many of the audience members, the one-time bill was too much and they sold their cars right away. Others sold since the vehicle wasn’t ideal for their area. Yet, there is still an Oprah G6 here and there. Oprah and several audience members still talk glowingly of the giveaway.

For Pontiac, the giveaway didn’t equal a boom in sales. In 2004, Pontiac sold 474,179 vehicles which was essentially flat compared to 2003. By the time 2009 came around, right before GM’s bankruptcy, Pontiac managed only 178,300 vehicle sales. And the rest is history.