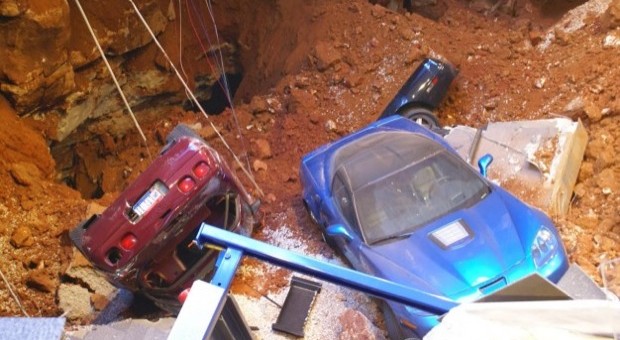 We all know the story; in the wee early hours of February 12th, 2014, a sinkhole opened up under the floor of the National Corvette Museum in Kentucky, swallowing eight classic Corvettes whole. Those lost to the geological phenomenon were: a 1993 ZR-1 Spyder and 1999 ZR1 “Blue Devil,” both on loan from General Motors, a 1962 Corvette, a 1984 PPG Pace Car, a 1993 40th Anniversary Corvette, a 2001 Mallett Hammer Z06, and a 1991 and a 2006 example, both in white, which were the millionth and 1.5 millionth Corvettes ever built, respectively.

The examples lost to the sinkhole are irreplaceable, and sent the American press into an uproar. The National Corvette Museum itself capitalized on the opportunity, making an exhibit of “the great eight” and drawing 70 percent more visitors to the museum since February of 2014 than in the same span of 2013.

The National Corvette Museum has finally decided to fill the sinkhole. They’ve also decided that there’s still more to milk from the tragedy, releasing the DVD on their own online store for $12.95, and solidifying the theory that when God gives you lemons, you can always sell t-shirts, lanyards, exhibits and DVDs until you have enough cash for apples.