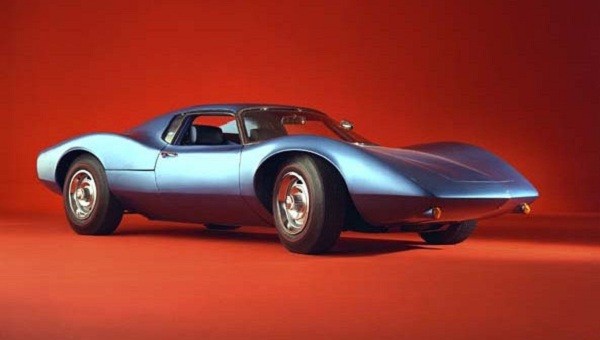 In 1967 Chevrolet unveiled their new Astro I concept to the crowds at the New York Auto Show. The car was designed by Larry Shinoda and was a radical prototype experiment meant to produce a low drag coefficient. The Astro I looked nothing like a Corvette and was powered by a modified version of the Corvair’s flat-six, but in 1968, Chevrolet introduced the Astro II, which looked strikingly similar to the third-generation Corvette of the time.

Not only did the Astro II look like a C3 Corvette, it sounded the part too. Chevrolet engineers exchanged the Astro I’s flat-six for a liquid-cooled 390 horsepower big block V8 engine, which sent its power through a two-speed transaxle torque converter from a Pontiac Tempest. This effectively made the car the first in a line of experimental mid-engine Corvette concepts.

Chevrolet engineers cobbled the Astro II together quickly using parts pulled from General Motors massive parts bin. Because of this, some components on the car weren’t up to the task of handling Big Block V8 power, mainly the Tempest transaxle. However the car was mostly built to showcase that Chevy was indeed capable of producing a car with a mid-mounted powertrain, like its rivals at Ford had already proved with the GT40.

The Astro II was rather capable during handling tests thanks to Chevrolet engineer’s unique packaging solutions and its light construction. The Astro II weighed in at 3,300 lbs, 300 less than a production C3 Corvette. This coupled with its mid-engine layout helped it achieve 1.0 G of cornering grip on street tires while being tested by Zora Arkus Duntov, an impressive feat even today.

The Astro II served as the inspiration for other mid-engine Corvette concepts, such as the XP-882 that soon followed it. When Chevrolet pulls the wraps off their rumored mid-engine C8 ZR1, we’ll have the Astro II and it’s engineers to thank for getting the ball rolling.