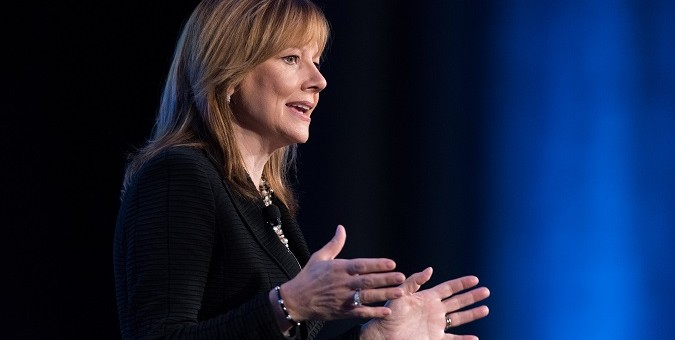 This weekend General Motors CEO Mary Barra spoke to the Intelligent Transport Society in Detroit, where she revealed the company’s Cadillac brand will soon introduce two intelligent driving technologies, V2V and Super Cruise. However Barra also addressed the problems of pollution, congestion, and traffic accidents during her remarks, saying it’s up to GM and other automakers to “mitigate, if not eliminate,” the issues.

“To me, these aren’t noble causes. They are imperatives. If we expect our industry to thrive well into the future, we have to provide solutions. To do that, we have to be passionate and fearless advocates for safety technologies like vehicle-to-vehicle communication, vehicle-to-infrastructure communication and ultimately, fully autonomous driving,” Barra said.

Barra noted that cars are more intelligent than they used to be, with short- and long-range radars, cameras and sensors being implemented in recent times. Despite these advances in technology, “crashes still occur far too frequently,” and “the toll on society is unacceptable and it’s a global problem,” she said.

GM took the first step towards safer roads when it introduced OnStar nearly 20 years ago. Now, OnStar is being implemented outside of North America in China and Mexico and has plans to expand into Europe next year. OnStar helps drivers once an accident has already occurred, however V2V and other smart driving technologies will help prevent them altogether.

“The sooner the industry puts a critical mass of V2V-equipped vehicles on the road, the more accidents we’ll prevent and the more society – and individual drivers – will benefit,” Barra said.

The longtime GM employee also noted the importance of vehicle-to-infrastructure tech, which will talk to the traffic system to help reduce congestion and improve travel times. V2I can also have a positive impact on the environment, as fuel is wasted when cars are unnecessarily sitting at a red light.

She ended her remarks by stressing the importance of bringing intelligent, connected vehicles to the market as soon as possible.

“Now we need to bring it all to market… and do it quickly, Barra said. “Let’s show the world that science, technology and innovation fuel our imaginations. Let’s follow in the footsteps of the engineers who invented the three-point seat belt, airbags and stability control. Let’s strive to build cars and trucks that don’t crash. Let’s connect our vehicles.”

The speech is too lengthy to embed here, so follow this link if you’d like to read Barra’s words in their entirety.