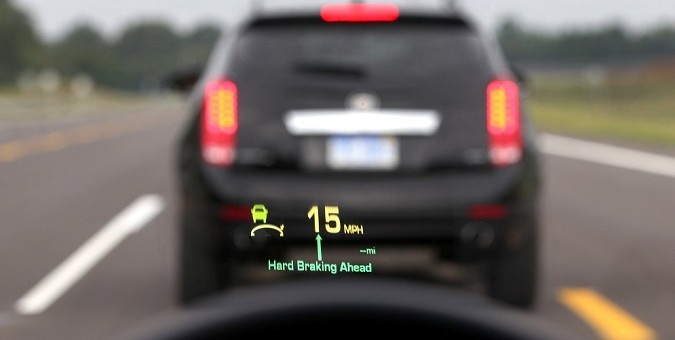 General Motors this week confirmed their vehicle-to-vehicle technology will debut in the CTS mid-size sedan for the 2017 model year. We know the technology will allow vehicles also equipped with the same or similar systems to connect, but what benefits does it have towards you as a driver? Jon Lauckner, GM Chief Technology Officer, Vice President of R&D and President of GM Ventures, decided to clear the air on what V2V actually does.

The first thing to know about V2V is that it’s not limited just to vehicle-to-vehicle applications, there is also V2I (vehicle-to-infrastructure), which connects the car to the roadways. In V2V communications, vehicles share information on their speed, position, direction and more with other cars and trucks. V2I will communicate to cars the road conditions, traffic light statuses, road attributes and even how many parking spaces are left in an area.

Lauckner explains the benefit V2V and V2I can have when they are combined. V2V can detect when the driver in front of you may be panic braking, or could detect a car in your blind spot even before a lane departure warning sensor could. V2I could also let drivers know about potholes or nasty road conditions.

GM first demonstrated V2V and V2I technologies when it partnered with the U.S. Department of Transportation and the University of Michigan’s Transportation Research Institute for the SafetyPilot program. The study was the largest public demonstration of V2X technologies implemented to date and helped GM collect data in order to better understand what a wide-scale implementation of the technology would require in the future.

Connected cars could reduce traffic congestion while also improving road safety, making for a better driving experience for everyone on the roads. Lauckner says GM is “uniquely positioned to help bring innovative transportation solutions like these to customers around the globe,” due to their position as a technology leader.