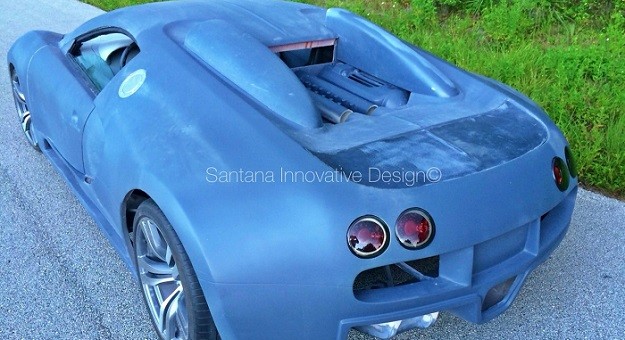 The majority of kit cars made to look mid-engine Ferraris and Lamborghinis use a cheaper mid-engine car as the base, such as a Pontiac Fiero or Toyota MR2. The builder of this Bugatti Veyron replica took a slightly different approach though and formed the fiberglass body around a 2004 Pontiac GTO chassis.

As far as replica exotic cars go, this appears to be one of the better ones. It actually looks somewhat like a Veyron, especially from the back, where the four circular taillights and fake W16 engine have been expertly integrated. Still, that’s like being the best of your friends at Guitar Hero, no one really cares unless it’s the real thing.

If there’s one thing that is real on this Veyron replica, it’s the performance. It might not be the levels of performance the real Veyron delivers, but the 365 horsepower LS1 engine in the GTO is no slouch and will deliver a better punch than any Fiero or MR2 could.

We’ve always thought you had to be a little out there to own a replica kit car and the asking price listed here has given some more credibility to our assumption. The builder wants $115,000 for the Veyron, which is cheaper than the $1.3 million the real Veyron goes for, but is way more than the 2015 Corvette Z06 and countless other desirable performance cars. For that reason, we have a feeling this one won’t be going anywhere fast. Check out the listing here.