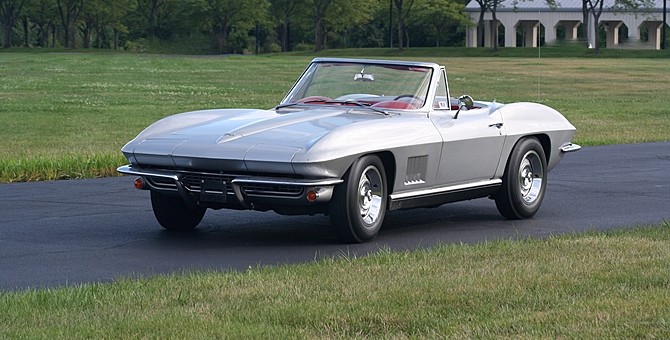 Many General Motors fans are more than aware of the COPO Camaro. COPO stands for Central Office Production Order and in the Camaro’s case allowed in-the-know customers and dealers to order the first-gen Camaro with a more powerful 7.0-liter 427 engine. It also allowed customers to order unavailable color combinations, such as the Silver Pearl exterior paint and red interior seen on this 1967 C2 Corvette convertible.

The COPO Corvette, which is just one of five with this unique color combination, will go under the gavel at Mecum’s Chicago auction. According to Mecum, Alan M. Baldwin, a sales manager at Dave Hallman Chevrolet in Hamburg, N.Y., originally placed the COPO order for customer Walter Brock. Brock kept the car for 15 months before it was sold to a second owner, who kept it for over 30 years and put just 16,000 miles on it.

The car remained unmodified and unrestored throughout this entire time and under the ownership of the current owner, received the coveted Bloomington Gold Survivor Certification in 2004. Today, the car remains unrestored and includes the original paint, glass, soft-top, transmission, engine and rear end.

This is truly a one-of-a kind Corvette. Even though there are other C2 Corvettes with the same silver/red combo, all of them have different engine configurations. This is one of two with a 327 Small Block motor and the only one built in 1967. If it sounds like the perfect car for you, bring your checkbook to Mecum’s Chicago auction to be held on October 9-11.