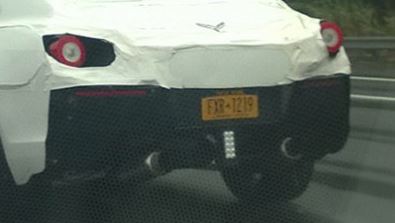 While evidence continues to mount that a mid-engine Corvette is imminent as soon as 2017, everybody remains rightfully skeptical. Even us. Even when our sources say it’s actually coming. Because, come on, how often have we all been burned before by the thought of a mid-engine Corvette, only to constantly have our hopes given up. Like rooting for the Detroit Lions, it all seems so very futile. But the dream lives. And that dream has a name: Zora. Or ZR1. Or Zora ZR1. Nobody is 100 percent sure at this point.

“A mid-engine Corvette? Yeah, okay, thanks for the clickbait that’s been happening since 1963,” everybody keeps saying.

Well, what do you say to the photos of this test mule found on Motoring Exposure? An apparent mish-mash of slapped together parts of a Chevrolet Malibu and a Corvette, complete with a crude set of exhaust pipes and a random reverse light nestled in between them. The rear wheels are C7, while the rear brakes appear Malibu. The front of the car is a Harlequin with a black bumper, with an odd grille that only half-covers what’s behind it, and a white hood strangely fitted with pins.

This could very well be the 2017 Corvette Zora ZR1, but something’s off here. Something is not adding up.

What makes us think that something’s aloof? Aside from the random Corvette badging over the plastic wrap (GM test cars never show any sort of branding), this mule sports New York plates, registered to a Malibu, and not Michigan manufacturer plates. Whether it’s real or not, it deserves our attention. Because if it is real, it’s time to stop looking at mid engine Corvette reports as simply moonshot rumors. If it’s nothing, this driver deserves an award for creativity and trolling the internet.