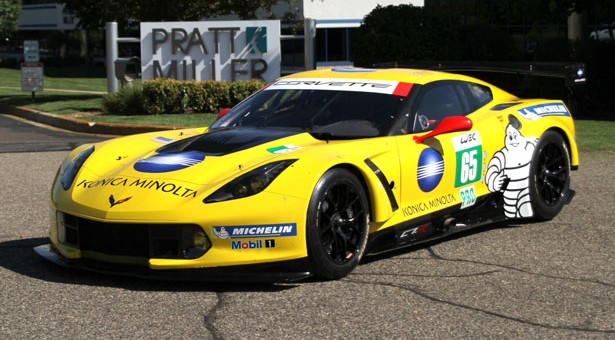 Corvette Racing has some ambitious plans for the upcoming race weekend at Circuit of the Americas in Texas. The team will race their usual Tudor United Sportscar Championship event, but will follow it up by entering a third No. 65 C7.R in the World Endurance Championship race to take place afterwards. For that race, the C7.R will be wearing a Konica Minolta/Michelin livery rather than the plain Corvette Racing theme it usually employs.

Don’t worry, the Konica Minolta livery will still allow the C7.R to retain its signature Velocity Yellow paint scheme that adds to the car’s huge on-track presence. Jordan and Ricky Taylor, who run a Konica Minolta-sponsored Corvette DP in Tudor competition, will drive the WEC entry along with Corvette Racing driver Tommy Milner. All three drivers will be doing double duty at COTA, racing the Tudor event and the 6-hour WEC event back-to-back.

The WEC race at COTA will be the first time Corvette Racing has ever raced in an FIA-sanctioned event apart from the 24 Hours of Le Mans. Two other American race teams, Krohn Racing and Extreme Speed Motorsports, have also joined the docket for the WEC’s COTA race.

Catch Corvette Racing’s back-to-back showing on September 20. The Tudor race will kick off at 12:35 p.m. and will last approximately 2 hours and 45 minutes. Then, after a short break, the WEC cars will hit the track at 5:00 p.m. and race their 6 hour event into the night. Keep your caffeine pills handy, Ricky, Jordan and Tommy.