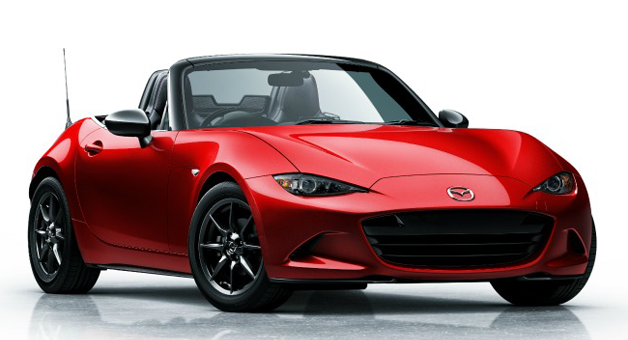 Mazda last night unveiled the highly anticipated 2016 ND-generation Miata at Mazda Raceway Laguna Seca in California. For years the Miata has been a hot-selling, fun to drive, affordable sportscar with a dedicated and loyal following, making the unveiling of an all-new model kind of a big deal. Mazda’s small sports car has been a huge success, so what if Chevrolet entered the segment?

The new Miata sticks to the same formula as its predecessors. A small four-cylinder engine will rest under the hood up front, with a six-speed manual transmission in the middle sending power to the rear-wheels. It will also be about 220 lbs lighter than the model it replaces, tipping the scales at a rumored 2,250 lbs. Only a soft-top model has been announced so far and the price is expected to not stray too far from the 2015 model’s $24,765 asking price.

The last General Motors rear-wheel drive sportscar was the Pontiac Solstice and its platform mate, the Saturn Sky. Sales of those models weren’t bad, but didn’t blow expectations out of the water either. The idea was revived in the way of the Chevrolet Code 130R concept from the 2012 North American International Auto Show in Detroit. The concept was a touch larger than the Subaru BRZ/Scion FR-S and was powered by the modest 150 horsepower 1.4-liter turbo engine from the Cruze. It wasn’t a soft-top like the Miata, but fit the sportscar bill.

Unfortunately, we haven’t heard much about the code 130R since its debut. Chevrolet may have been worried the car would rob sales from the Camaro, or they may have been put off by the underwhelming sales the BRZ and FR-S have experienced. Do you think Chevy needs an answer to the Miata? Would be different or similar to the Code 130 R? Give us a shout in the comments below.