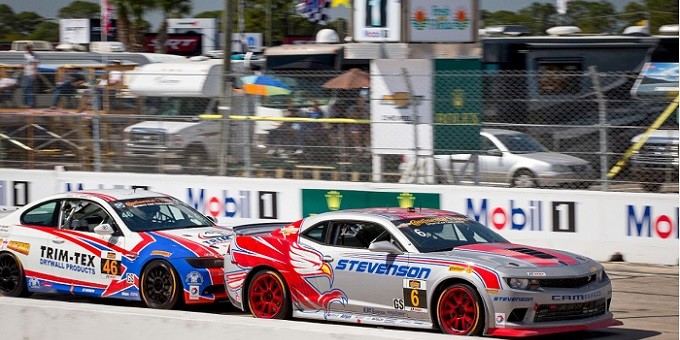 Chevrolet has five wins under its belt in the Continental Tire Sports Car Challenge this season and with only two races left to go, leads the Grand Sport manufacturer championship thanks to its Camaro Z/28.R. Team Chevy drivers Andrew Davis and Robin Liddell are also leading the GS class driver’s standings and will be looking to maintain their lead when the series heads to Circuit of the Americas in Austin later this month.

Of the four different Camaro Z/28.R entries on the Continental Tire grid, three have won races this year for a total of five victories and an additional nine podium finishes. The car may have its work cut out for it at COTA though, as the long straights and high speed sweepers should prove to be a challenge for the big Camaro, which is up against entries from BMW, Porsche, Nissan and others.

“The layout at Circuit of The Americas provides one of the toughest tests we will see all year,” said Chevrolet Program Manager for the Continental Tire Sports Car Challenge, Lisa Talarico. “It mixes three fairly decent straights with a combination of high-speed sweeping turns and low- to medium-speed corners. The ideal setup likely will be more on the side of downforce and handling instead of outright speed”

Stevenson Motorsports’ Davis and Liddell currently hold the GS driver’s championship by two points thanks to three victories and back-to-back second place finishes at the two most recent races, held at Road America and VIR. Stevenson Motorsports’ second Z/28.R, piloted by Andy Lally and Matt Bell, has won one race, while CKS Autosport’s pairing of Eric Curran and Lawson Aschenbach in the No. 01 Camaro Z/28.R also have one win under their belt.

Chevrolet says the performance of the Z/28.R has “been impressive in qualifying as well.” Curran, Davis, Bell and Corvette Racing’s Jordan Taylor have all scored poles in the car this year. The Z/28,R shares much of its components with the road-going Z/28 including the downforce-generating front splitter, rear wickerbill spoiler and hood extractor vent. It also shares its 7.0-liter LS7 engine with the road car.

You can catch the Z/28.R as it hits Circuit of the Americas during a live stream of the race on IMSA.com on September 20. FOX Sports 1 will also be airing the race at noon the following weekend on Sunday, September 28.