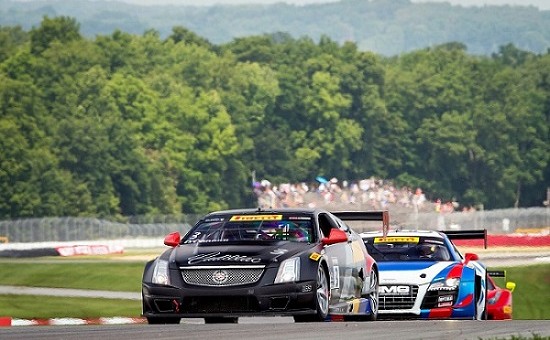 Cadillac Racing driver Johnny O’Connell will be looking to defend his small 42-point lead in the GT category as the Pirelli World Challenge travels to Miller Motorsports Park in Utah for the Series Championship Nissan Finale Weekend.

Cadillac Racing managed to pull off wins at Long Beach and Detroit and landed on the podium at Barber, Road America, Toronto and Mid-Ohio. However the second half of the season hasn’t been so kind to them, with the extra weight of their CTS.V.R racecar over the lighter GT3-spec cars beginning to have more of an effect.

“Honestly our game plan is going to be what it has been all season long,” said O’Connell, a two-time World Challenge GT champion. “Work together as a team and try to execute perfectly on all levels. Everyone in the series knows that we are currently operating at a serious disadvantage to the other cars. For both races I will need to be perfect and the team will need to be perfect as well. I simply plan on bringing the same level of intensity to both races that I do at every single event for Cadillac racing.”

Mike Skeen of Hawk Performance trails O’Connell closely in the GT drivers’ standings and on certain tracks has a clear advantage with his Audi R8 LMS Ultra. The GT3-spec cars already have aerodynamic advantages over the Cadillac and series officials added more weight to the CTS.V.R following the race at Road America, making O’Connells championship dreams seem even more difficult to achieve.

“I’m naturally concerned because there are aspects of Miller that are similar to Road America. To remind people, at Road America we were a second slower than the Audi,” explained O’Connell. “Yet after the race the series added 130 pounds (75 pound reduction for Miller) to our car. It is because of this, that I would have to say that Audi has a distinct advantage over us going into the final two races.”

Teammate Andy Pilgrim is currently fourth in the GT driver’s standings and is just 58 points out of third. He will also have to perform if the team wishes to steal the manufacturer’s lead from Audi, who they are currently trailing by just seven points.

“We have a manufacturers championship to win for Cadillac and the team focus will be on doing just that at Miller,” Pilgrim said. “We are behind Audi in second place right now, but it’s not completely out of reach, so we’ll be pushing 110% to make it happen.”

The Pirelli World Challenge Series head to Miller Motorsports Park in Utah for the final two rounds of the season on September 12-13. The season finale will be televised on NBC Sports Network, Sun., Sept. 28 at 2:30 p.m. ET and can be streamed live on the World Challenge’s website.