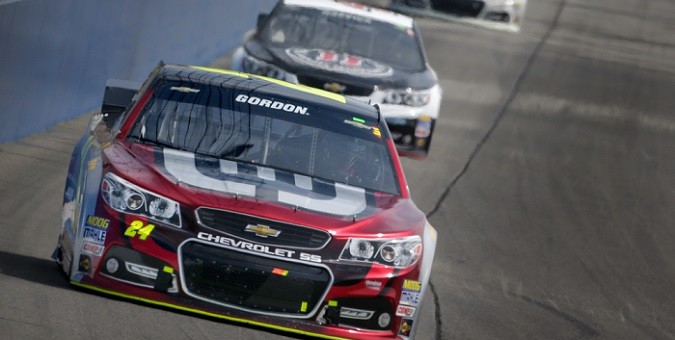 Ford driver Brad Keselowski continued his reign over the majority of the NASCAR field Sunday night at Chicagoland Speedway. The first race in the Chase for the NASCAR Sprint Cup saw Keselowski battle back after an error was made during a pit stop to win, finishing 1.7 seconds and 2.7 seconds ahead of Team Chevy’s Jeff Gordon and Kyle Larson, respectively.

Chevy driver Kevin Harvick led the majority of the race, but was bumped back in the order for the same problem Keselowski had. In both cases, the wheel was not fastened properly during a pit stop, forcing the two drivers to come back in to have it tightened. Meanwhile, stand-out rookie Kyle Larson had battled from last position to first after a crash during practice forced him into his back-up Chevrolet SS.

A full-course caution late in the race had Larson battling with Harvick upon the restart, but the real victor would be Keselowski, who surged through the middle of the two Chevys and claimed first position. Another Yellow flag was put out after Danica Patrick and Ricky Stenhouse crashed into eachother, prompting another caution with only 6 laps left in the race.

Upon the restart, current Sprint Cup runner-up Jeff Gordon joined the fight for a podium finish. He lurched ahead to battle with Larson for second place, who brushed the wall and gave his position up to the four-time Sprint Cup Series champ. Meanwhile, Harvick lost his position to Logano in his Ford, putting the Stewart-Haas Racing driver in fifth and Logano in fourth.

Other Team Chevy drivers in the top ten included Kurt Busch and Jamie McMurray. Dale Earnhardt Jr., who is currently fifth in the standings behind Harvick, Logano, Gordon and Keselowski, finished 11th after qualifying 13th. Danica Patrick went on to finish 19th, more than 18.5 seconds behind the leader, after getting caught up with Stenhouse late in the race.