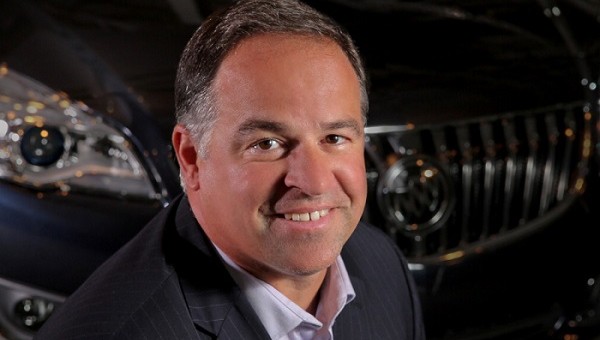 Buick and GMC sales have been steadily rising as of late, with Buick sales increasing by 12 percent year-over-year as of July and GMC sales climbing 8 percent. Part of Buick’s success could be tacked up to its recent “Experience the New Buick” TV ad campaign, which kicked off with the now well-known “Hmmm,” ad. Toni DiSalle, US Vice President of marketing for Buick and GMC, recently sat down with Brandchannel to discuss the new campaign and the present state and future of Buick and GMC marketing.

The original “Experience the New Buick” commercial, which featured an elderly woman confidently claiming her grandson’s new Regal GS is “not a Buick,” was popular both online and on the TV screen. DiSalle says the success was in part due to the ad’s ability to play off of consumers’ misconceptions about the brand.

“It leveraged consumers’ misperceptions about Buick and reeled them in and does it with a very creative twist,” DiSalle explained. “It takes the false familiarity that consumers think they have with Buick and helps bring to life what today’s Buicks are. It’s as simple as that. So we’re going to continue with that formula.”

Disalle said Buick is now going to release five product-specific spots using the same footage from the “Hmmm,” ad, as they were all shot together as a package. There will be an “Experience the new Encore,” ad, an “Experience the new Regal ad,” and so on. He added that this advertising approach will work because many consumers still have a skewed idea of the Buick brand.

“Lots of consumers have a dated perspective of what the brand is,” said DiSalle. “They will cite some older vehicles that we no longer sell such as Rendezvous or LeSabre or Century. One reason for that is that the “car park” of America is still heavily populated with those old vehicles, and what people see is what they know. But we have some all-new vehicles in our “renaissance portfolio” and we have refreshed others. After people see the ad, there have been dramatic gains in consideration, opinion and call-to-action metrics such as going to the website or visiting a Buick dealer.”

Disalle said his marketing department is “leveraging the product to change consumer perception of the brand,” by directly addressing the undesirable ‘old person’s car’ stereotype in its advertisements. He said Buick is not a brand that is afraid to laugh at itself, and the marketing helps it attain an “approachable and inviting and warm,” image, which is unlike other premium brands.

We’ve stuck one of Buick’s new “Experience the New Buick” TV spots below, with the rest appearing on the brand’s YouTube page. You can also read DiSalle’s full interview with Brandchannel right here.