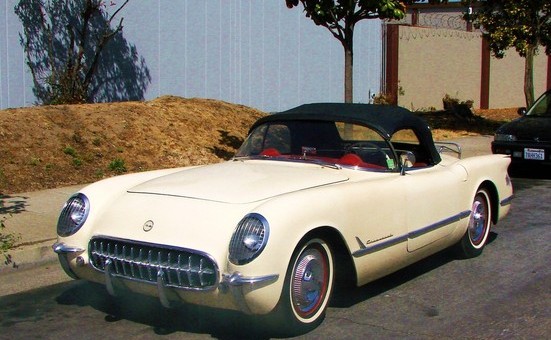 Countless breathtaking automobiles will gather in Monterey, California this week for the region’s annual Car Week event, a 5-day long celebration of everything automotive which consist of car shows and auctions and concludes on Sunday with the Pebble Beach Concours d’Elegance. One of the many desirable cars heading to auction during Car Week is this, a 1953 Corvette found by Corvette Blogger that has had only two owners in its 61-year life span.

The Corvette, which is number 149 out of the initial first year production run of 300, was sold by the original owner to David Grove in 1961. Grove was an internationally acclaimed illustrator who had his works published in Road & Track, Car and Driver, National Geographic and even featured in the Hall of Fame at Indianapolis Motor Speedway.

Grove meticulously maintained the Corvette himself, with it being described as an “unmolested original.” There is a small paint chip on the left-rear tail due to a “garage mishap” shortly before Grove’s death in 2012 and the trunk mats and soft top have both been replaced, though the original deteriorated mats are still with the car. Other than that, this ‘Vette looks exactly how it did when it left the Detroit production line in 1953.

The 1953 Corvette will go under the gavel on Saturday, Aug. 16 between approximately 8:18 and 8:38 p.m. at Russo and Steele’s 14th Annual Monterey California Auction. Russo and Steele gave no estimation on price, however the car is being offered without a reserve.