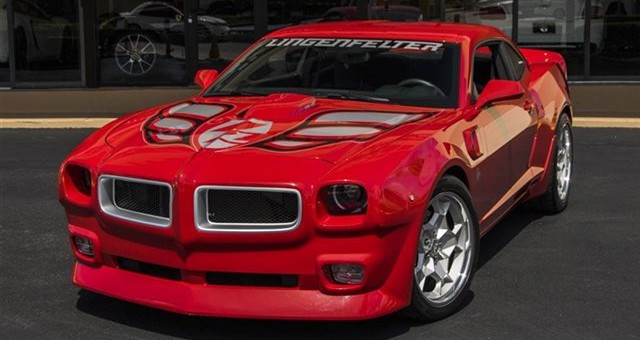 Since the advent of the revived Chevrolet Camaro, several shops have tried to convert it to a Pontiac Firebird (in several iterations of the Trans Am, no less). Some have been more successful than others, but Lingenfelter’s LTA Camaro reminds you it’s what’s under the hood that counts. A very special version of these quasi-Trans Ams is currently on eBay.

Lingenfelter’s LTA Camaro comes in four states of tune, but all of them come with the following:

Levels 2 and 3 add numerous upgrades to the engine, not to mention the body and interior, but the standard body kit without engine upgrades are part of Level 1 as listed above, which costs $45,000 on top of the Camaro SS. Level 3 costs $129,800 on top of the price of the car − almost twice as much as Level 2!

Ya gotta admit they did a nice job of making it look like a 1970-73 Trans Am, right? Maybe it’s a little cartoonish from some perspectives, but the Camaro is already that way. The one on eBay may be more special than any one you can buy new because it is one of four prototypes created in 2010. Not only that, but it’s a Level 3 monster with a 655-horsepower 455 . . . but it’s an LSX, not Poncho power. This one looks to be emulating a 1973 Trans Am due to the color (red, white, and Brewster Green were the only colors available that year) and “Screaming Chicken” on the hood (an option starting in 1973). With a hair over 9,200 miles, you can have this Camaro/Trans Am for $75,900 instead of the $170,000 or so a new one will cost.