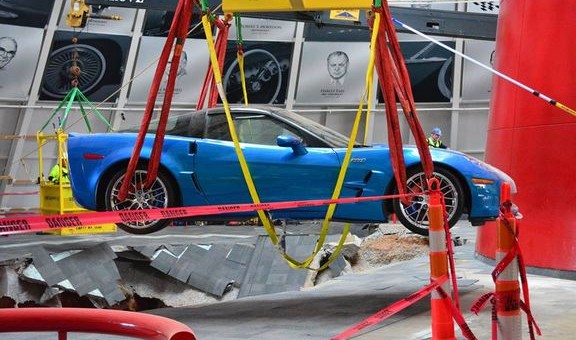 Officially, the National Corvette Museum will backtrack on its original decision, and fill the massive sinkhole that emerged in its Skydome, which swallowed eight historic Corvettes earlier this year. Of those eight Corvettes, General Motors, through Chevrolet, will only restore three of them.

The lucky three Chevrolet will restore are the “Blue Devil” 2009 Corvette ZR1 prototype, the 1-millionth Corvette produced which is a white 1992 convertible, and will fund the restoration of the 1962 Corvette, which the National Corvette Museum will oversee.  A restoration shop has not yet been determined. The other five Corvettes will remain in the tattered state that they were recovered in, to “preserve their historical significance.” Which could be translated to the fact that they were simply wrecked beyond repair. They will remain on display at the NCM, in a section dedicated to the event.

What’s more, General Motors will provide nearly $250,000 in support to help the NCM recover from the sinkhole, which is celebrating its 20th anniversary this weekend. As for why the NCM is filling the sinkhole, it simply came down to money.

“At the June board meeting, the information available at that time indicated a cost of around $500,000 more to keep the hole, but after incorporating additional safety features and vapor barriers for humidity control, the price tag rose to $1 million more than the cost to put the Skydome back how it was,” according to Museum Executive Director Wendell Strode.