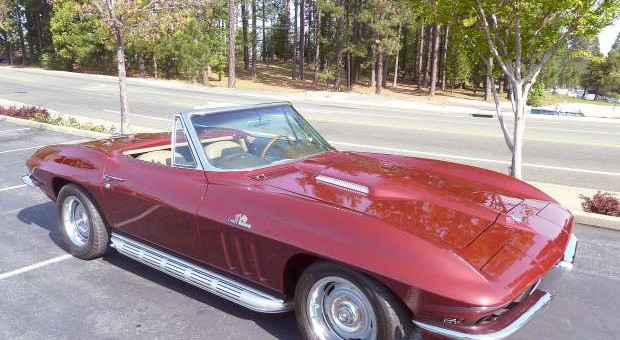 Ever have a proposition that seems too good to be true? Larry Potter’s friend had a 1966 427 Corvette − a gorgeous Milano Maroon metallic example with the L36 big-block − but he was more inclined to have a brand-new 2004 Corvette. Larry wanted the ’66, so he went out and bought a C6, made the switch, and everyone lived happily ever after. Sound like a deal? It must be because Larry still owns that C2.

As Ron Cherry relates in The Union, Larry’s Corvette was loaded with plenty of good options from 1966, such as the four-speed manual (Powerglide was the only other tranny available with the 427/390), power windows, telescoping wood steering wheel, leather interior, sidepipes, AM/FM, and air conditioning. AC in a 4-speed convertible? That’s quite a rare combination, although how rare is not known. What we do know is that 5,116 L36 Corvettes were built, which is actually rarer than the more powerful L72 427/425.

Now, 10 years later, the NorCal resident and his wife have a car that is worth much more than the 2004 Corvette, although value is not really a factor when it comes to enjoying old cars. Sure, new cars are light-years better every which way, but the style of the C2 Corvette, combined with its big-block rumble, make them hard to beat. If Larry and his wife crave the advantages of a late-model Corvette, they still have a 2011 Corvette Grand Sport to satisfy the urge.

Big thanks to Ron Cherry − you can read more of his musings, automotive and otherwise, at www.rlcherry.com.